How to use React with Typescript in Phoenix (failed attempt)

Update: Looks like I jumped the gun on writing this tutorial. I ran into further issues as soon as I wrote non-trivial code. I gave up on trying to make this work with Brunch, the default build tool, which at the moment just isn’t designed for something like Typescript. I’ll document the difficulties I ran into below. TL;DR replace Brunch with Webpack and follow Typescript + Webpack setup instructions. Read this other tutorial I wrote instead

Brunch compilation order is not configurable

Brunch is designed to be user-friendly. It avoids making you write too much configuration by automatically looking for Brunch plugins among all installed packages. To determine compilation order, it uses dependency order in package.json. This is fine when most plugins operate on different file types and alphabetical ordering just happens to work. However, we’d want to run Typescript before Babel, Uglify, etc, so we need to order it first in package.json.

It’s a bit of an abuse of package.json to use it for build settings but it’d be fine if it wasn’t for…

…the fact that NPM reorders everything alphabetically whenever you install a new package.

The last solution is clearly the right way to do it in order to use Brunch as a general build tool, especially given that order of elements within JSON dictionaries is undefined. However, an issue has been opened for a year. I don’t feel comfortable creating a PR that implements plugin ordering as the maintainers seem uninterested in the use cases that require it.

The file extensions don’t get changed after Typescript compilation

That is, .ts and .tsx file types don’t get changed to .js and .jsx files. Note that these files are kept in-memory in Brunch as far as I can tell, so this requires configuration.

Note that the latter use case is not viable unless your entire codebase is in Typescript. If you also happen to have “plain” .jsx files, this could cause incompatibilities between the Typescript output and the Babel output. I ran into some problems trying that though I did not investigate in depth.

Brunch does not support project-wide compilation

This works as long as 99% of the “compilation work” is just syntactic transformations (e.g. ES6 -> ES5). The other 1%, resolving requires/imports is handled as a special step inside brunch using their custom-built deppack dependency resolver.

However, this fails on typed languages or anything that has cross-file interactions other than require such as Typescript, Elm, etc.

The first solution is ideal. You can still engineer it correctly to avoid recompiling everything every time something changes. However, it’s a huge change in the architecture of Brunch and would likely break all current plugins. It doesn’t look like there’s enough resources/energy behind Brunch to make this happen at the moment.

The second solution is kind of a hack but will work for the most part. There may be some brittleness if the IDE decides to behave slightly differently (e.g. resolving imports in a different order, running a different Typescript version).

This shouldn’t really be a problem. Conceptually, Brunch is already following dependencies after Typescript and Babel compilation. However, once I’ve fixed the file extension change, deppack breaks and won’t look for requires in files that were originally non-Javascript.

To save other people some work, I’ll document my diagnostic here. In deppack:explore.js, a file won’t be parsed for its dependencies if it fails the isJs test which, among other things, takes a fileList of all the files we might want to include in the final app.js. However, the fileList is a map whose keys are the original file paths (i.e. .ts files) whereas we’ve already changed the path to a .js file after compilation.

This is not as simple to fix as just “update fileList with the new file extension”. As far as I can tell, fileList is passed by reference and mutating it could have unpredictable consequences, especially since compilation happens on a per-file basis. Furthermore, the exploreDeps function that uses isJs is a very complex function that uses thrice-nested lambdas to achieve a sort of currying. Furthermore, not only does it explore dependencies, but is also responsible for some form of event watching.

Yet another obstacle to fixing this is that there’s already a huge PR with bug fixes, refactors and breaking changes on its way in Brunch. Large enough that it’s probably a bad idea to write a branch in parallel to it, it would be better to build on top of it. However, at the time of writing, it’s completion stage is unclear (can’t build on top of it) and it also seems stalled.

This is the part that I gave up as the cost-benefit ratio of untangling all these concerns is too high.

I understand that Phoenix comes by default with a simple-to-use build system that can easily be swapped out. However, Brunch doesn’t seem to be getting the attention/resources/energy to keep up with the JS ecosystem and having to swap the build system reduces the feeling that “things just work”.

Below is the original tutorial I wrote.

This is a tutorial on setting up an (Elixir) Phoenix project that can be used to write React apps that use Typescript, a combination of nice things (IMO). Previous tutorials have been written to use Phoenix with React or Typescript with React using Webpack but not all 3 together. I ran into a few difficulties while setting it up myself (namely because Phoenix uses Brunch by default rather than Webpack) so here’s a guide on how to do it to make things faster for you!

As usual, start by creating a new Phoenix project and install the dependencies. This is just here for convenience, make sure to follow the official docs on how to setup postgres and other considerations.

You can test if it worked:

If you want, you this could also be a good time to setup your git repository.

Let’s start by setting up just React, so that have an intermediate step that we can test, which makes things easier to figure out if anything goes wrong.

First, as you probably know, React uses JSX syntax which allows embedding HTML inside Javascript code. Also, React is written in ES6 nowadays, so we typically use Babel to compile the ES6 JSX down to plain ES5 to make sure it runs on all browsers. So we’ll need to install React and the Babel plugin that does that (Babel itself already comes by default with Phoenix).

Then let’s tell Babel to use it. Add the following in your .brunch-config.js

Then, we can add a React component to our page. First, let’s make an HTML node that React will get rendered from. You can replace the default contents of web/templates/page/index.html.eex with just:

Let’s create a simple React component that we want to show in web/static/js/hello.jsx.

Finally, to show that component, we need to render it under the react-main div. Add the following to the end of web/static/js/app.js:

And this should just work! Go to your browser and see if it looks as expected.

Getting Typescript to compile our code is a bit work, though it’s not that bad. First, have Typescript installed globally:

It doesn’t hurt to have it locally too:

Now that we have an additional compilation step, we’ll want to put it in the brunch pipeline too. Basically, we’re going from .tsx -> .jsx -> .js.

First, update the Brunch version in package.json to 2.10.9:

This is important because at the time of writing, the latest Phoenix version (1.2.4) ships with 2.7.4 which doesn’t have the targetExtension API. This means that the .tsx files’ extension doesn’t change after compilation. Babel ends up ignoring them, and we end up with a syntax error because there’s still HTML elements left that can’t be parsed in a plain Javascript file.

Phoenix v1.3.0 will be using the newer version of Brunch.

Now, it also turns out that typescript-brunch, the Brunch plugin for Typescript, doesn’t use targetExtension. I’ve forked the repository and until my PR is merged, you can add my repository in package.json. Note that Brunch will execute plugins in the order that they show up in package.json, so it’s very important that it is placed before babel-brunch! Your package.json should contain this:

Then npm install. You can run mix phoenix.server now to check that everything still works.

We’re getting close! Let’s configure the Typescript compiler to output ES6 and JSX. This allows the output of the Typescript compiler to be very close to the original source, with just the type annotations stripped away. It’ll be more consistent with other JSX files we might add into the project (e.g. if you copy over an older file without type annotation) and Babel will take care of the rest. Otherwise, if you let Typescript compile to ES5, you could run into incompatibilities such as how module imports with require are handled. Add the following options in brunch-config.js.

The Typescript compiler has other options that you may want to add, but I’ll keep the tutorial simple. Make sure to take a look at the docs. Also note that the options in brunch-config.js will override any in tsconfig.json, the usually place where compiler settings go.

For our last bit of setup, install type definitions for React and ReactDOM:

To test if this all works, let’s create a Typescript component in web/static/js/world.tsx.

It doesn’t do much, but I’ve added two type annotations to try it out. And let’s change web/static/js/app.js to show this component 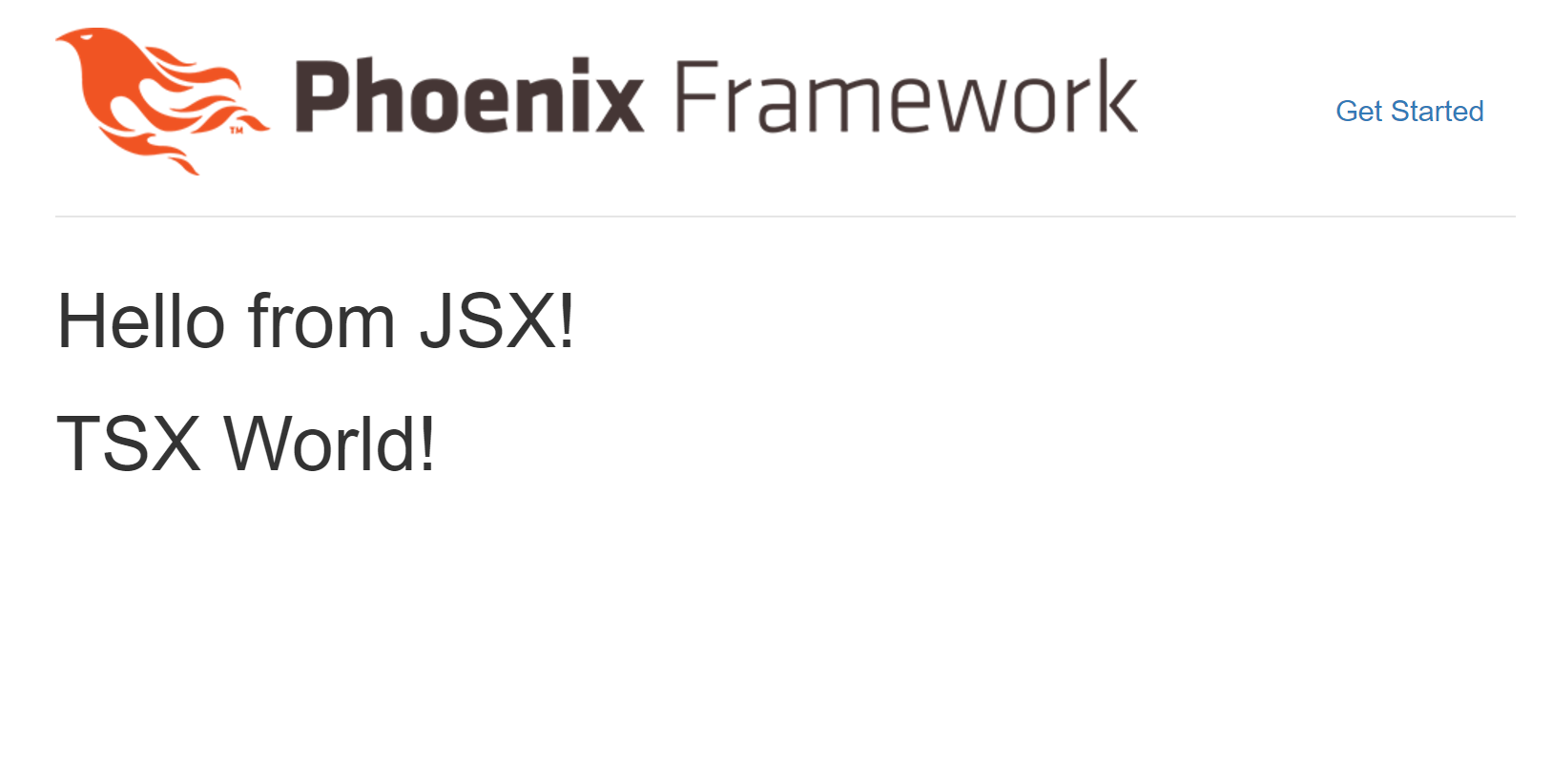 If you got lost along the way, or would prefer to use a template that already works, you can find a barebone project here: https://github.com/rudi-c/typescript-react-phoenix

Make sure to also take a look at Tom Duncalf’s tutorial on setting up Typescript in Webpack. He explains various flags of Typescript in more depth, talks Visual Studio Code, and provides a few other suggestions to make Typescript work more smoothly.

If you intend to use Visual Studio Code for Typescript (it works great!), you may also be interested in using it for Elixir using the vscode-elixir plugin.

Since you may end up building a SPA (Single-Page App) now that you’re using React, you’ll probably end up using the /api endpoint much more in router.ex. You might even find it easier to use channels for everything.

Enjoy! Let me know in the comments if you have any questions.