In September 2022 I went to South Korea to study Go for a month. For the audience of this blog, I usually need to specify: Go the board game, not Go the programming language. In the western world, the game is called using the Japanese term Go (碁) but for the remainder of this blog post I will use the term Baduk (바둑) since I was in Korea. If I was in China, I’d call it Weiqi (围棋).

Where in Korea did you go to study baduk?

Fortunately I had a starting point that didn’t require me to know how to speak Korean. I went to Blackie’s International Baduk Academy, which is a baduk school specifically for foreigners. Kim Seung-jun (Blackie) 9P and Diána Kőszegi (Dia) 1P are the teachers.

Accommodations are provided and you live with the other students/teacher. As such, baduk wasn’t just classes I had to attend at certain hours of the day, but rather it was the entire experience. We also weren’t in Seoul proper but rather, in the suburbs at the edge of Seongnam/Gwangju. That being said, the teachers had a mini-van and we drove to Seoul quite often. It was quite impressive, it could fit up to 10 people and we even got to zoom past all the morning traffic by taking the bus lane (minimum 6 passengers).

I believe there used to be places in Japan or China that foreigners would go to study pre-covid, but neither countries were open for travel (Japan opened at the tail end of my trip, and China well, lol).

How did you find the school?

At some point when I started playing, I figured it would be good to get direct feedback once in a while. So I looked for instructors online. And you see, when you look for english-speaking baduk teachers on Google, there is a limited number of search results and it doesn’t take long to find all of them.

What was the occasion to take a whole month to study?

I’m basically a dinosaur fossil at this point.

But seriously, my employer (Figma) has a sabbatical program where you get to take an extended leave after you’ve been there for 5 years (this is considered a long time in tech industry where the average tenure is two years). I used half of it for baduk.

Did you know baduk already?

Yes, I’m not an expert but not a beginner either. I had a lot of free time to play/study during the pandemic before we got vaccinated and there was nothing else to do. I had been going to the Berkeley and San Francisco go clubs on occasion. I’m about 3 kyu — for those of you who don’t know what that means, it’s something like “mid-advanced intermediate”. I was still the weakest player at BIBA, but your strength doesn’t really matter. There’s no entry tests to get into BIBA, you just email them and ask if you can come. The school seeks to promote baduk among foreigners, not produce professionals.

It depends on the day.

On many (perhaps even a majority?) of days, there was something on the schedule. Examples: 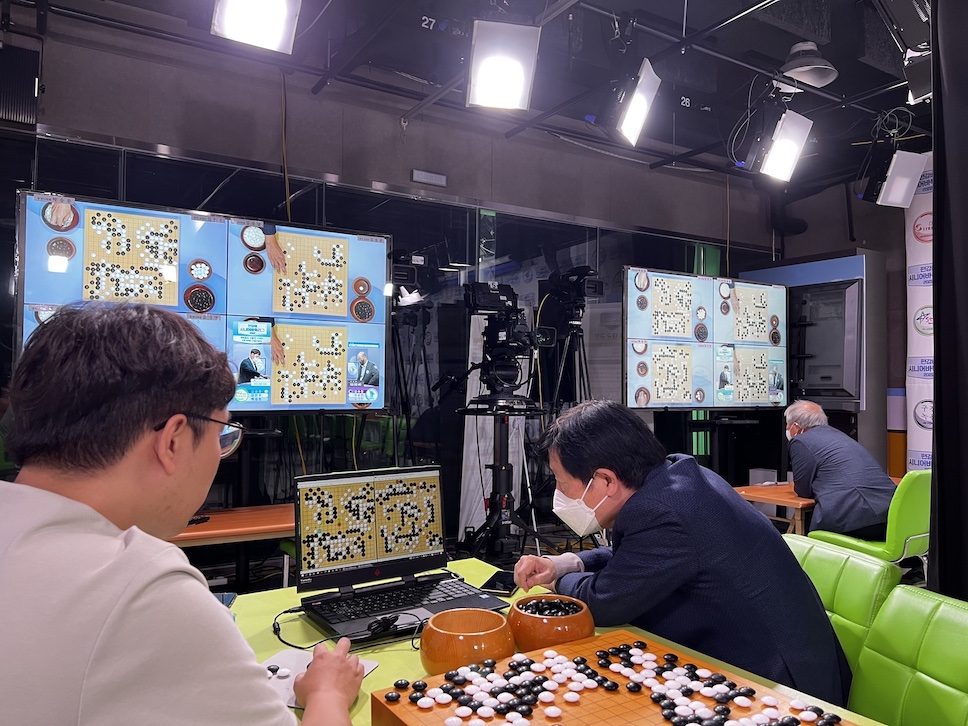 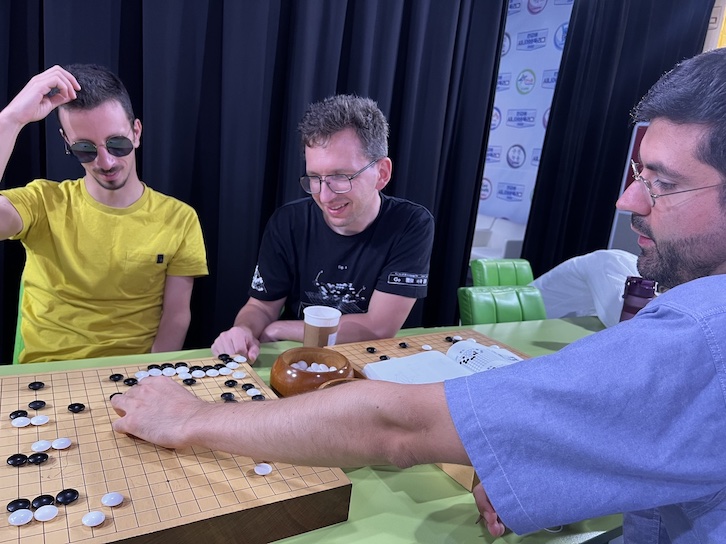 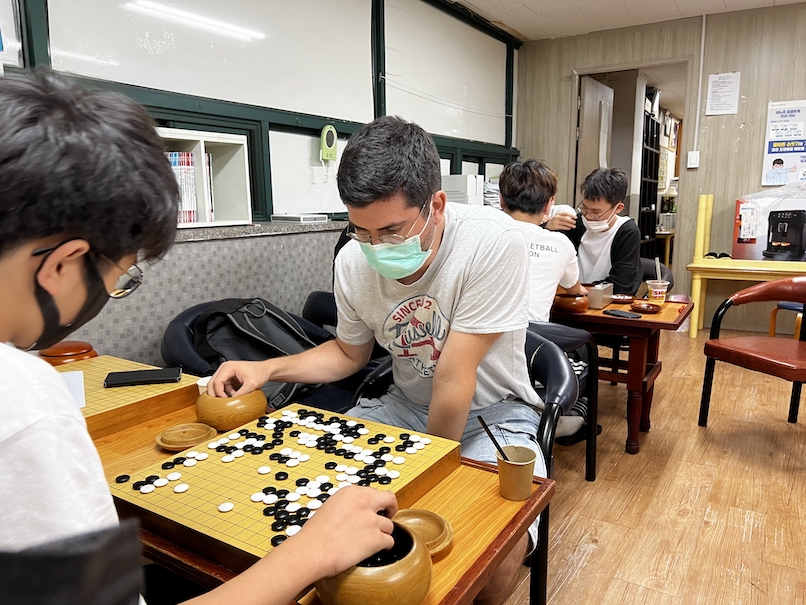 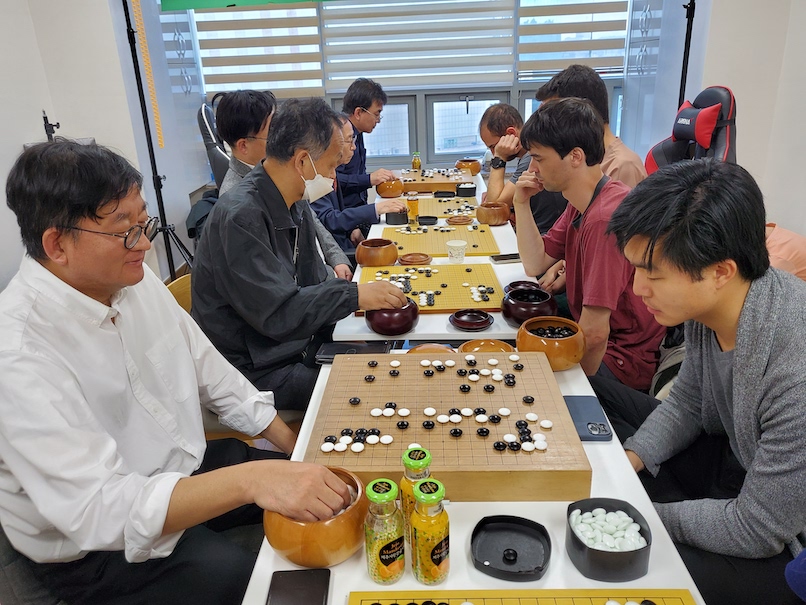 On other days, it’s generally studying on your own and playing games with the other students. The teachers will provide problem sets on demand and correct the answers, but the amount and intensity of studying is largely up to you.

A typical day didn’t start until early afternoon — early morning was a good time to self-study. In the evening, it was typically board games (the Catan type) or eating/drinking/poker in Seoul. 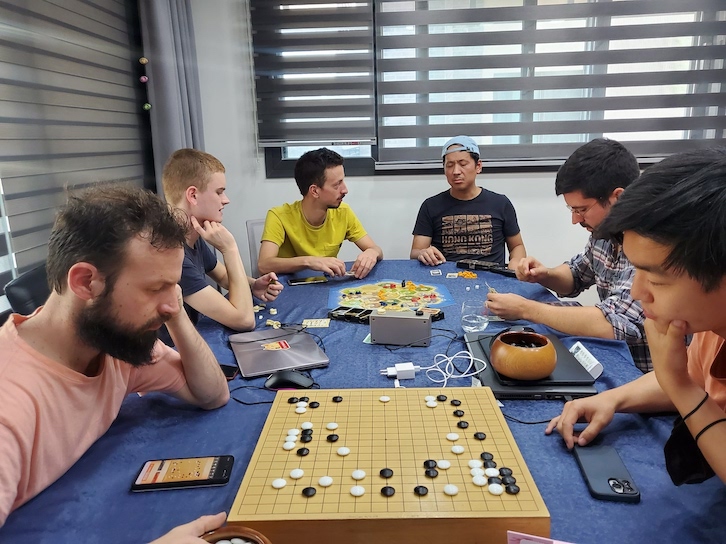 An evening at home

The Korea Prime Minister Cup, a world amateur tournament was held while I was there which was timely.

I was not my country’s representative (Canada has too many strong players), but I got to sneak in since the teachers were working at the tournament as english-speaking professional commentators/game reviewers. This way, I got the chance to meet a lot of top amateurs and play against the representatives of some countries that were around my level in the after-hours. 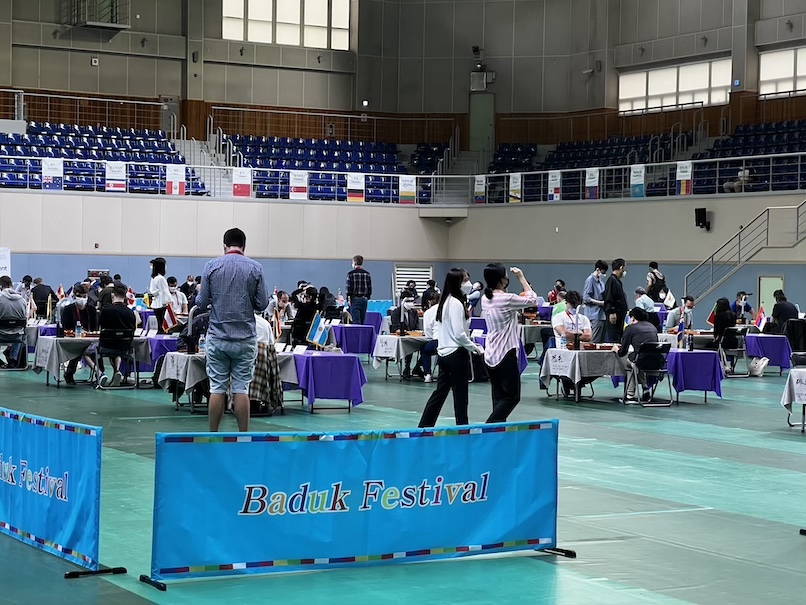 During the tournament -- if you look closely, you'll see Yoonyoung working as the head referee next to Lee Yujin

Funnily, I managed to get myself a “job” while there. They needed some extra people who understand the game to record the games while they were being played for the purpose of livestreaming to the the Internet, so here’s me with an official vest, and a link to a game I recorded, Belgium v.s. New Zealand. 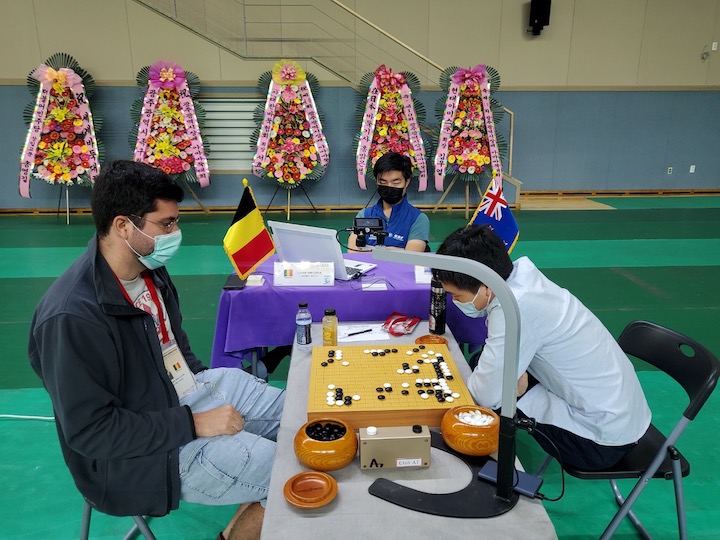 Who were the other students?

Most of the other students this year were their country representatives for KPMC, and wanted to stay a few extra weeks in Korea before/after the tournament. There was only me and a Russian teenager who were not there for KPMC. The party grew quite large, at peak I think we were around 8 students. In terms of age, the mode was around 25-30 with the youngest being 14 and the oldest being in their 60s.

What are some highlights?

The best part about being part of a baduk school and being there around KPMC is that I got to meet a lot of professional and top amateur players. There are only about 400 or so baduk professionals in Korea, most of whom have been studying in baduk schools since a young age. It’s a close-knit community, kind of like how tech people befriend other tech people but even moreso. As such, we met a lot of other pros via the social circles of the teachers and went drinking/bowling/etc.

This gives a glimpse into the life of a baduk professional, not as those monstrously skilled players, but as humans with aspirations (such as travelling, getting better at english) and who effectively work as freelancers. Being a baduk pro in Korea is not really a job so much as a title. It gives you the ability to play in tournaments (and be paid), but otherwise it’s up to the individual to figure out what to do with it.

Other than that, some notable moments involving recognizable names: 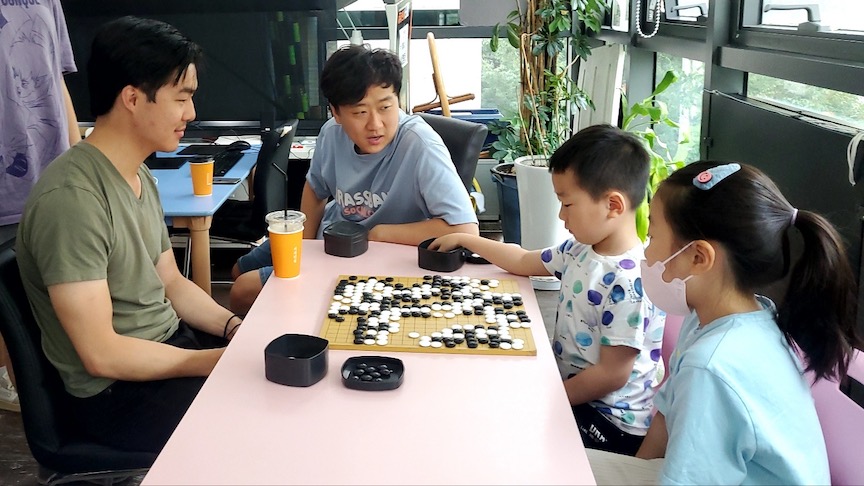 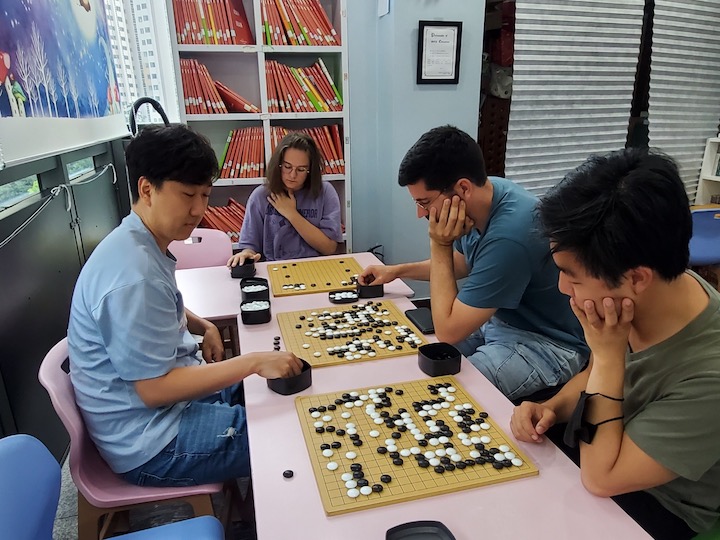 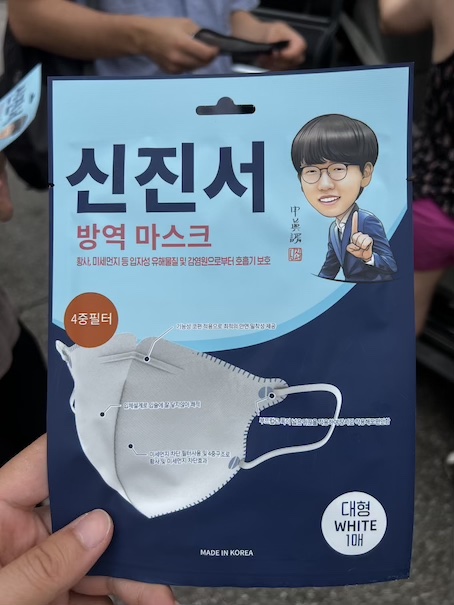 A mask to give you power

Was it what you expected?

Unlike many of the other students who learned about this school from word-of-mouth, I went in completely blind, so I didn’t have very set expectations. That being said,

Overall, it was a great experience! The opportunity to meet so many people was inspiring.

Did you become stronger?

This one is hard to say. The dan players at the SF Go Club said my opening has improved, and I certainly increased my “vocabulary” of moves while at BIBA. On the other hand, I didn’t play online much while at BIBA or after (urgh, circumstances, I’ve been very busy after coming back to the US) so it’s hard to say if my rank changed.

Like most foreigners, my weakest area is raw reading ability which can only be fixed with large volumes of problem sets, which implies heads down in the library studying. However, going to BIBA certainly increased my motivation to do so, and to be more involved with the go community at large.

Can I go to BIBA too?

Just email them! Though they are no longer open year-round like they used to, Blackie and Dia have expressed interest in opening it again next year.

They also teach online and can connect you with young upcoming Korean pros.