The range of Perlin noise

Lots of scenes in nature are random-looking: clouds, water, fire, grass. Sure, we can tell those apart, but each cloud is different from its neighbors.

Thus, in computer graphics, when we want to simulate nature, we need to generate some random numbers. However, if I just plotted a bunch of random numbers between 0 and 1, it would look like this: 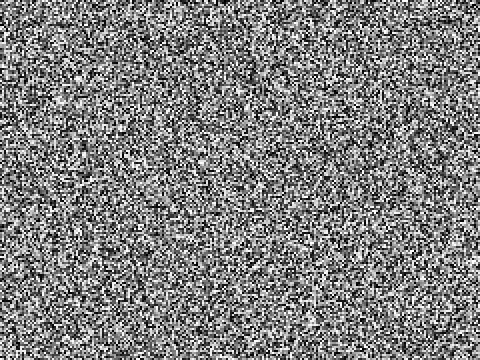 Such a function was developed by Ken Perlin in 1983 and he eventually got an academy award for it, because it was that useful to 3D graphics. In 2D, it looks like this: 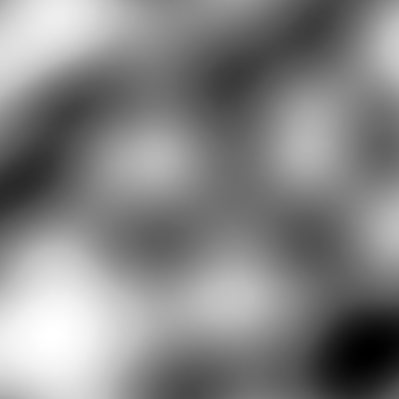 And it also comes in 1D and 3D versions. I won’t explain how Perlin noise is generated in this blog post, as there are already excellent resources for this. See link 1, link 2 and link 3. Rather, I want to address what might seem like a simple question: what is the range of values of Perlin noise?

Why care about the range? Well, consider the simple task of plotting 2D Perlin noise in grayscale. You need to convert Perlin noise at every pixel into a value from 0 to 255, which is the input that the monitor takes. Ideally, the smallest and largest values of Perlin noise should map to 0 and 255 respectively. You could make an approximation and clamp values that fall outside that range, but it would be nice to get an exact range in advance.

Interestingly enough, this information is hard to find! None of the tutorials I found mention anything about the range. Not even the original paper does. As a result, there are a lot of misconceptions. The Unity implementation contradicts itself saying that the Mathf.PerlinNoise returns a “float Value between 0.0 and 1.0” yet warns that “it is possible for the return value to slightly exceed 1.0f”.

Now, I’m not the first person to ask this question. It’s been asked on Stack Overflow before and there’s a thread on GameDev.net from 2004 where the posters fumble around and eventually arrive at an answer (while making a bunch of wrong claims, such as saying that Perlin-noise is Gaussian-distributed and can have arbitrarily large values with low probability).

That’s why I’m hoping this blog post will provide a definite answer to this question. It might seem like a lot of work just to find a number but hey, I think that number is important.

It’s actually quite easy to guess the range of Perlin noise if you have a good visualization tool and knowledge of how Perlin noise is calculated. As a reminder, Perlin noise works by generating a random unit vector at each point of a lattice which represents the gradient of Perlin noise at that point (hence why it’s called gradient noise) and interpolating in-between.

If you use an interactive visualizer like the excellent one Andrew Kensler made and just play around arranging the vectors in different configurations, you can make spots become brighter or darker. And it looks like the configuration of vectors that achieve the brightest/darkest spot is when they all point towards/away from the center of a square.

We can demonstrate that this configuration of vector indeed produces the largest Perlin noise value, using one of three different methods:

What kind of Perlin noise?

Before I proceed, I need to clarify what exactly I mean by Perlin noise, since it has a few variations and tweaks.

Second, Ken Perlin published an Improved Perlin noise where he made a few tweaks. He changed the original interpolation function from \( 3t^2 - 2t^3 \) to \( 6t^5 - 15t^4 + 10t^3 \) which has better continuity properties. This doesn’t affect the range of values of Perlin noise but it does affect the value and location of the maximum in the gradient magnitude.

Third, there are many different ways to select the random vectors at the grid cell corners. In Improved Perlin noise, instead of selecting any random vector, one of 12 vectors pointing to the edges of a cube are used instead. Here, I will talk strictly about a continuous range of angles since it is easier - however, the range of value of an implementation of Perlin noise using a restricted set of vectors will never be larger. Finally, the script in this repository assumes the vectors are of unit length. If they not, the range of value should be scaled according to the maximum vector length. Note that the vectors in Improved Perlin noise are not unit length.

Now, onto the meat of the work.

The key techniques used are gradient descent and automatic differentiation. Gradient descent (or ascent) just means “keep going up the hill until you’ve reached the top of the hill”. Perlin noise is made of many hills though, so hill-climbing is done multiple times, starting at random points, to have the best chance of finding the highest hill. However, hill-climbing works best if the “up” direction of the hill is known. This is determined using the gradient (derivative) of Perlin noise. This can be worked out analytically, but it’s cool to use automatic differentiation which calculates the derivative of any function with respect to its arguments. And I don’t mean function in the mathematical sense, I’m also talking about programming functions. You can differentiate a function even if it contains branches, loops and function calls!

You can find my implementation on Github. The end result for 2D Perlin noise does indeed tell me that the maximum is at the center of the square, with all gradient vectors pointing towards it. 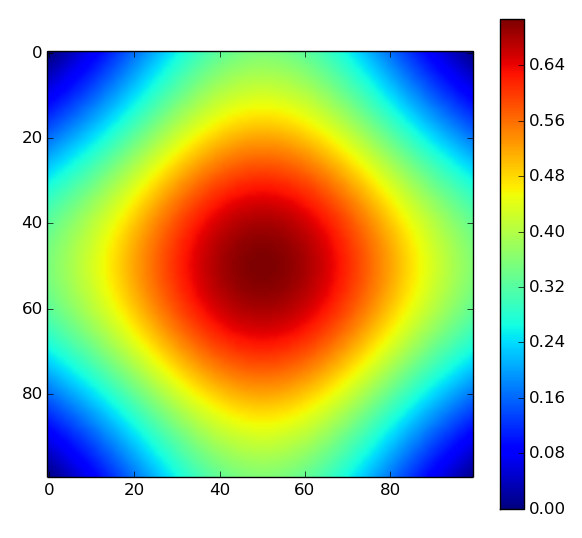 If we assume this result generalizes for n dimensions, then the maximum value of Perlin noise is indeed \( \sqrt{N/4} \). Note that simulations would get expensive very quickly since n-dimensional Perlin noise has \( (n-1)2^n + n \) variables to optimize over.

Finally, we can finish off by showing that our intuition and the numerical result is correct using a formal proof.

We want to find the maximum value of this equation over all possible corner vectors \( A, B, C, D \) and positions \( x, y \in [0, 1] \). Since Perlin Noise is symmetric, the minimum is obtained in the exact same way.

This function is dome-shaped, with a peak at the center. We want to prove that the maximum is at \( (\frac{1}{2},\frac{1}{2}) \). First, rearrange the terms to emphasize the order of interpolation

Which we already proved previously. Combinining these results, and the condition that \( u’(y) \ge 0 \), we get

Which is maximized with \( x = \frac{1}{2} \) using the same proof. The same principle can be repeated with higher-dimensional Perlin noise using induction by iteratively maximizing one dimension at a time.

And this concludes our algebraic proof.