Today I discovered the idea of proofreading using text-to-speech software. It helps find improvements to make in sentences when they sound off.

This sounds like a nice writing trick in theory, so I decided to immediately put it into practice to try it out (and if I don’t do it now, I might forget about it by the time I need it). I downloaded NaturalReader and copied my Dropbox blog posts one paragraph at the time and let “David” read them out for me. 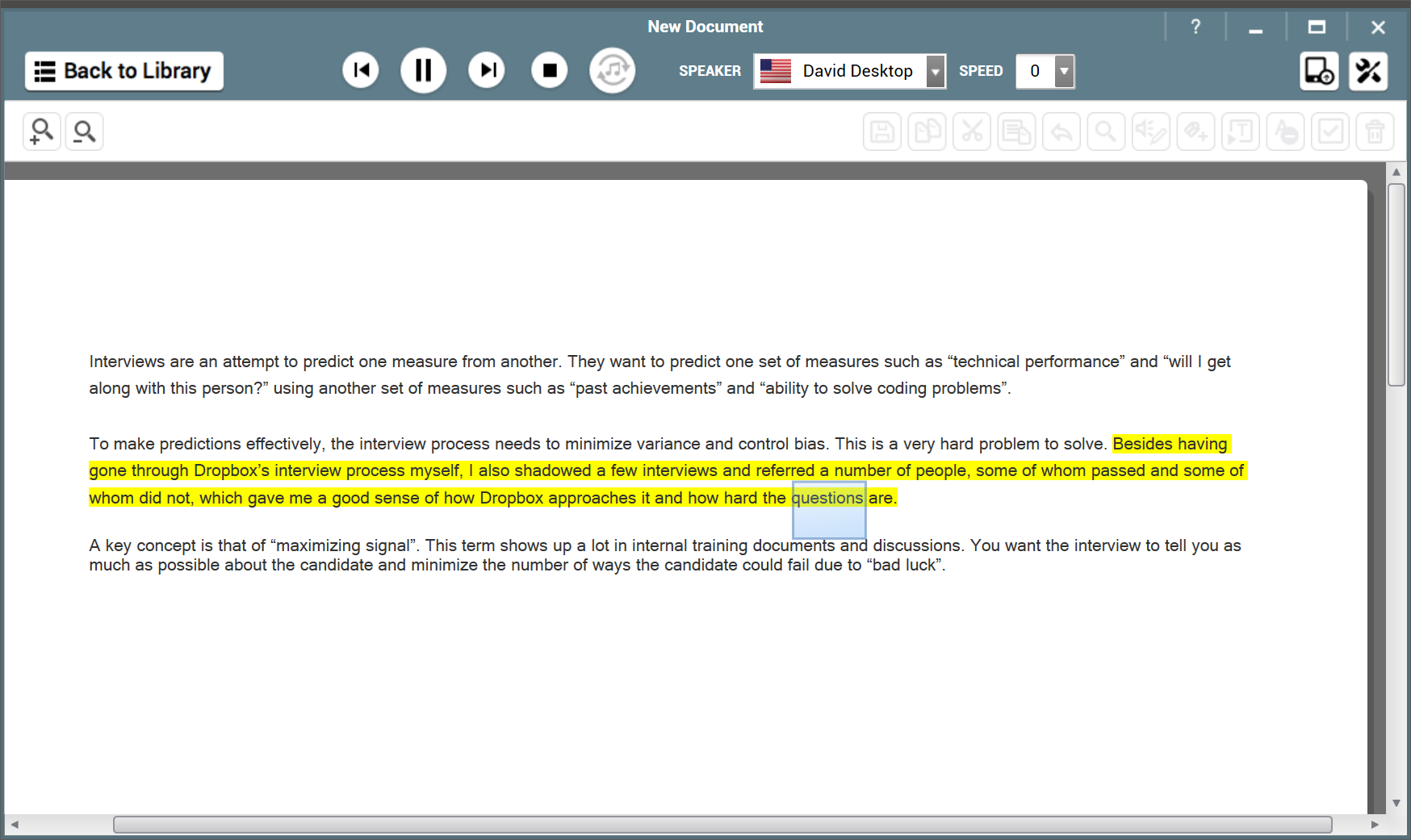 The result was that I caught quite a few typos and imperfections. Since my blog is hosted on Github pages, you can see all the corrections I made in this diff.

Here are some examples:

…as the app originally only displayed a screen-size thumbnail (before).

…as the app originally displayed only a screen-size thumbnail (after).

I often have difficulties with the placement of modifiers such as only and just. Hearing the two different versions in speech accentuates any awkwardness in their placement.

Those projects were interesting exercises in understanding the distinction between doing something and doing it well, and I learned the culture at Dropbox leans strongly towards doing it well, “sweating the details”. (before)

Those projects were interesting exercises in understanding the distinction between doing something and doing it well, and I learned that the culture at Dropbox leans strongly towards doing it well. They call it “sweating the details”. (after)

This was one of the longer sentences. It doesn’t look too long on the screen, but it would be hard to follow someone saying that sentence to you.

This is a simple typo. They are surprisingly hard to catch. The brain is being too clever here, as the huamn mnid deos not raed ervey lteter by istlef, but the wrod as a wlohe.

Similar to the above. Not only does the brain read whole words at a time, it can sometimes read whole sequences of words at a time. The quick context switching with the parentheses is much more jarring in speech, in the absence of a birds-eye view on the sentence.

In general, text-to-speech is the closest thing to a third-party reader without having a third party reader. The writer of a piece will be most vulnerable to the brain’s automatic error-correction power, as he already knows what to expect. After all, humans don’t perceive the world solely through their eyes, but also reconstruct it based on expectations, such as prior knowledge about objects.