Digital Nomadism - The people of Airbnb

As I was planning my nomading journey, I determined that three weeks per city was a good balance between the number of places to visit and the amount of time to spend in each place. For that length of time, living in Airbnb rentals is the way to go. They are convenient and provide a more local experience than hotels. Indeed, I was pleasantly surprised as to how much I got out of it. 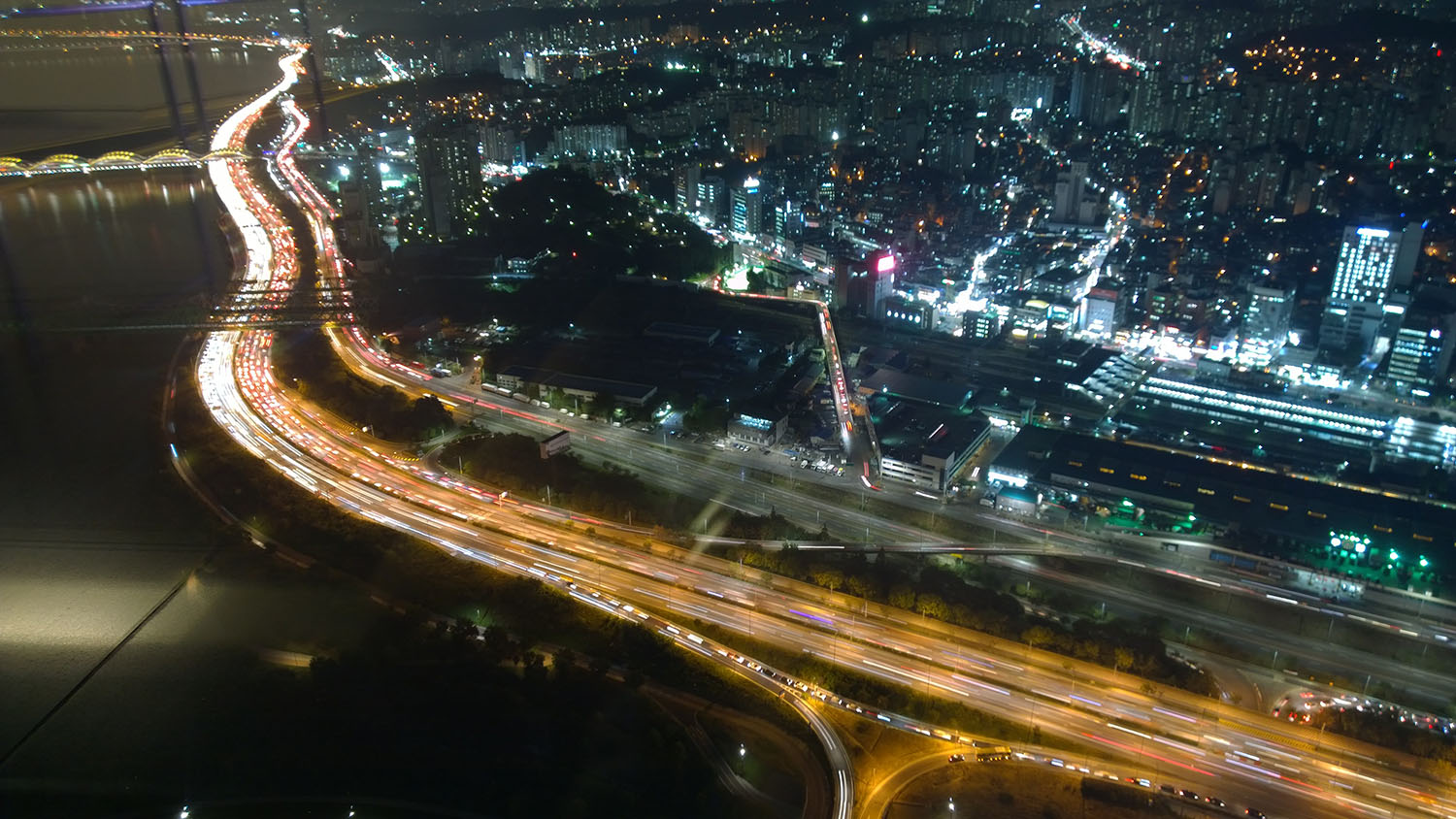 My first stop was in Seoul, and my stay there set the tone for the rest of the trip. I immediately found out the potential to meet a wide variety of interesting people.

My host described himself on his Airbnb profile as a 32-year old English teacher, who’s lived in Korea for a couple years. He also happens to have a business on the side selling car headlight bulbs. The insight there is that those lights are really easy to change by yourself if you know to buy them off the Internet, but garages will mark up the price enormously. He also seemed well connected with local small business owners. As someone heads deep in the Silicon Valley tech scene, it’s refreshing to talk to small business entrepreneurs like him, who do everything the tech people do (find a market, find a need, execute on it) without constantly seeking the spotlight.

One of the guests was a 50-something writer with multiple published books. He’s extraordinarily well-traveled and knows a very broad range of people: artists, entrepreneurs, etc. After all, to write about people, you need to know people and care about people. I frequently meet people smarter than myself, but it’s still uncommon to have the chance to talk to someone with that much life experience. It brings a whole different level of perspective and nuance. 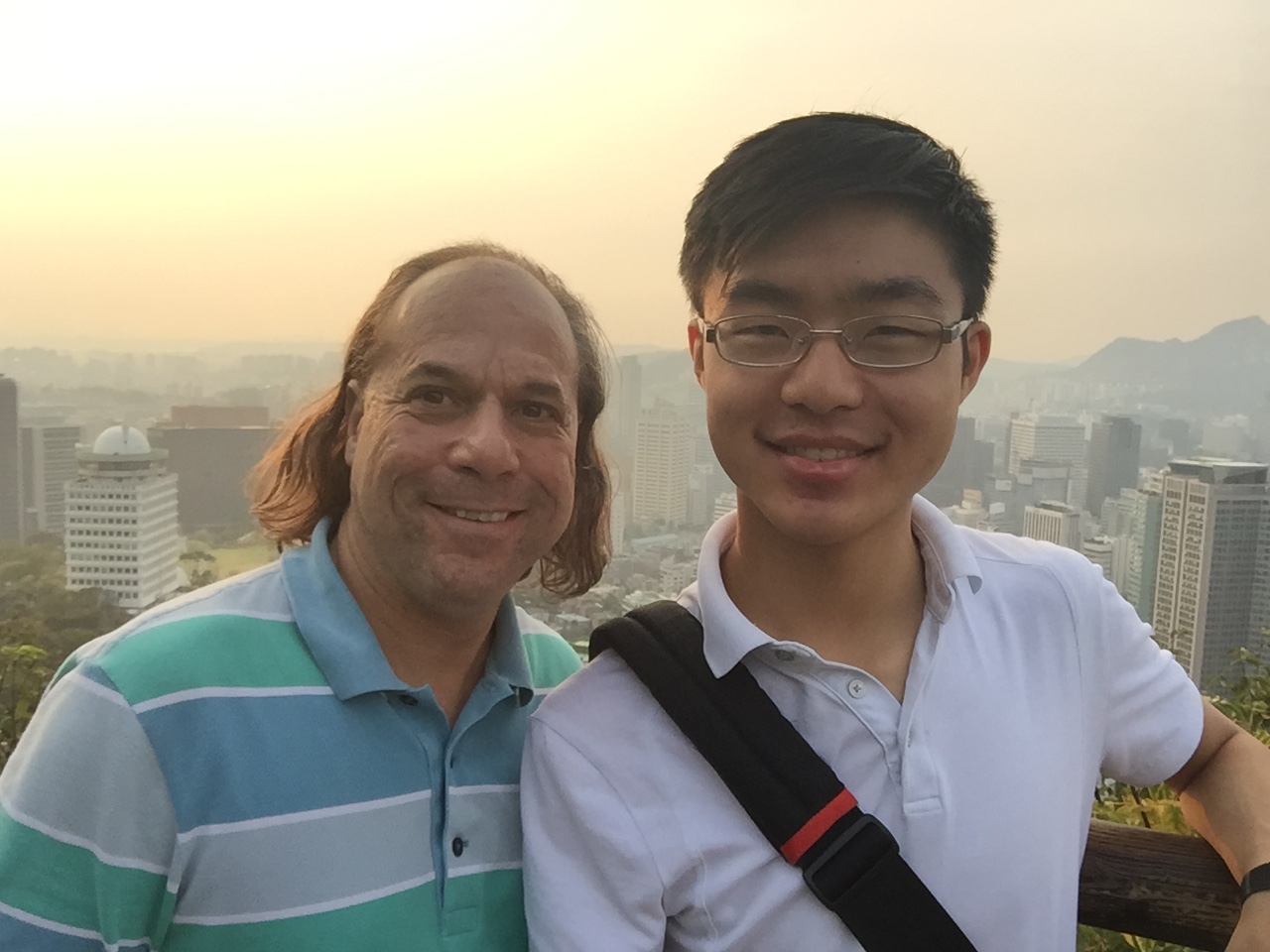 Another guest was a family man with his wife and newborn, who were biking around Korea. As we were talking about our travel plans, I showed him the app I’d been working on. Throughout my trip, I would often show it to people, since it is part of my travels, in a way. However, this time was unusual in that he had oddly specific questions about rendering, about supporting other types of fractals, etc. Turns out he’s a quantum computer researcher.

Welll I just got outclassed. But had the chance to learn about quantum annealers!

There were other interesting guests, like a Spanish expat who now works in Beijing. I didn’t get time to talk to everyone as much, but it was a good start. 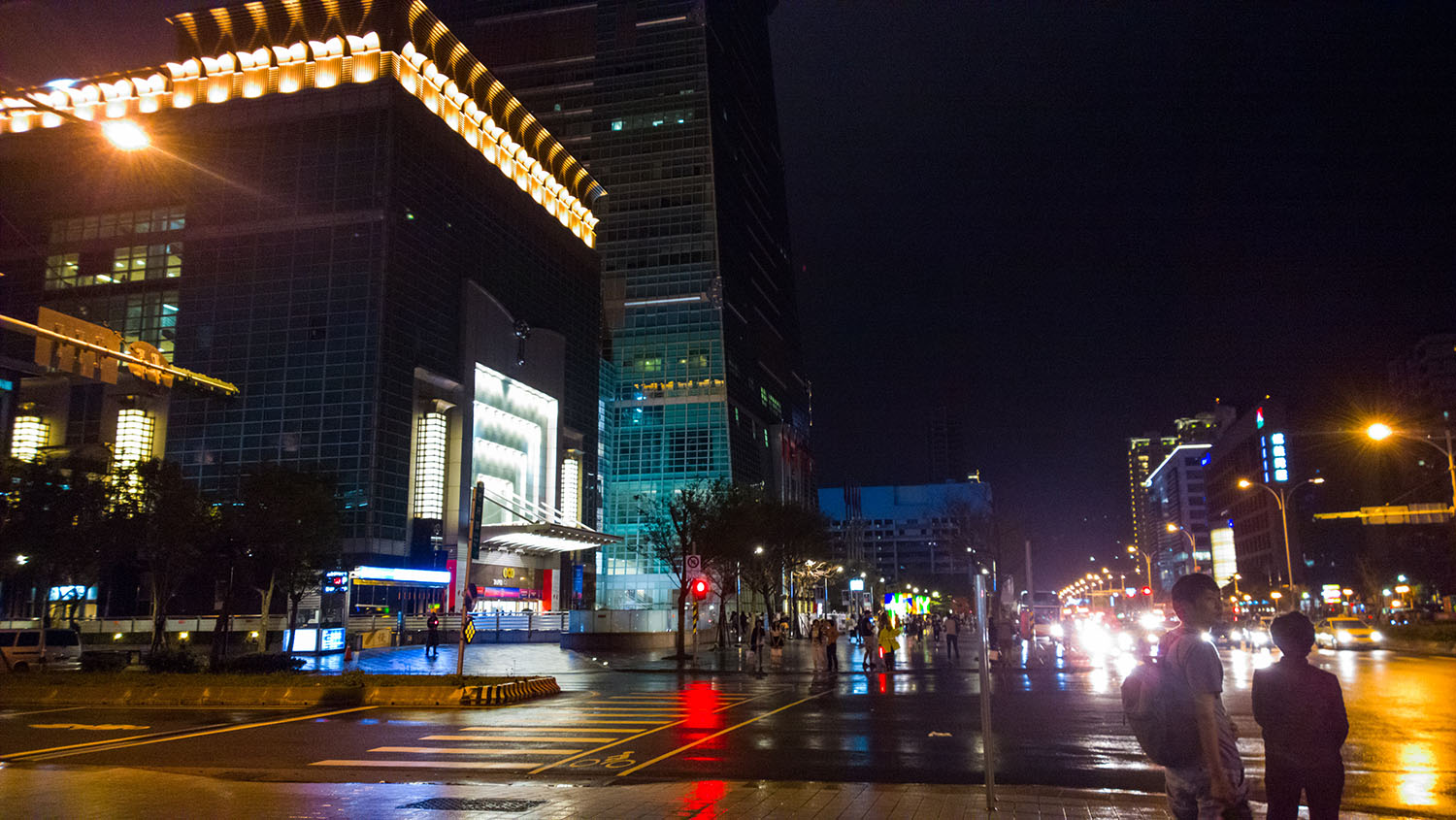 Towards Taipei 101, the coolest skyscraper ever.

The host’s profile wasn’t too descriptive, but anyone who bothers taking good pictures and put up nice minimalist decoration has a good sense of style. That has to be a good sign. 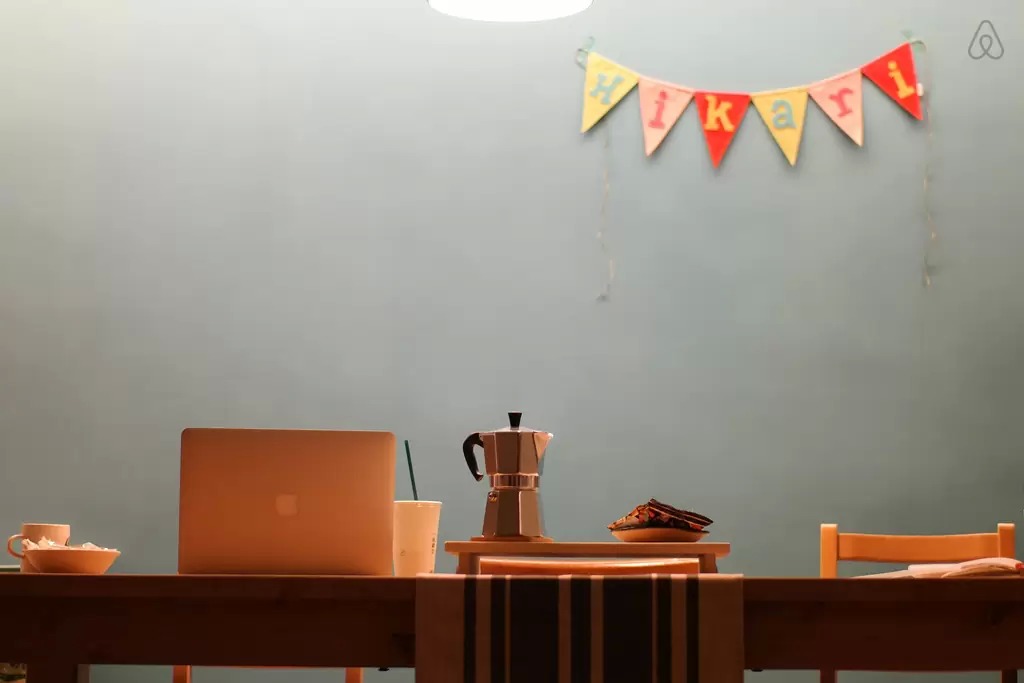 And my hunch turned out to be right.

My host’s English was excellent, which helps a lot with having good conversations. She works in insurance sales, but also helps out at 3–4 of her friends businesses on the side. She was also quite passionate about Taiwan politics and could describe at a fairly deep level a lot of aspects of Taiwan’s society which I was curious to learn about. A true metropolitan. This is really awesome because politics is one of those subjects where the local’s perspective is very valuable. Wikipedia will tells you past events, but not how the locals feel. However, they might not want to talk to a foreigner about it since in most parts of the world, politics is taboo subject (in my opinion, overly so).

I don’t quite remember what those side jobs were, but that hardly matters. It’s energizing just to be around people who are involved, in any shape or form.

Among other guests, there was a young couple from Hong Kong (from whom I learned that I speak Chinese really fast, apparently) and a pair of TEDx attendees. 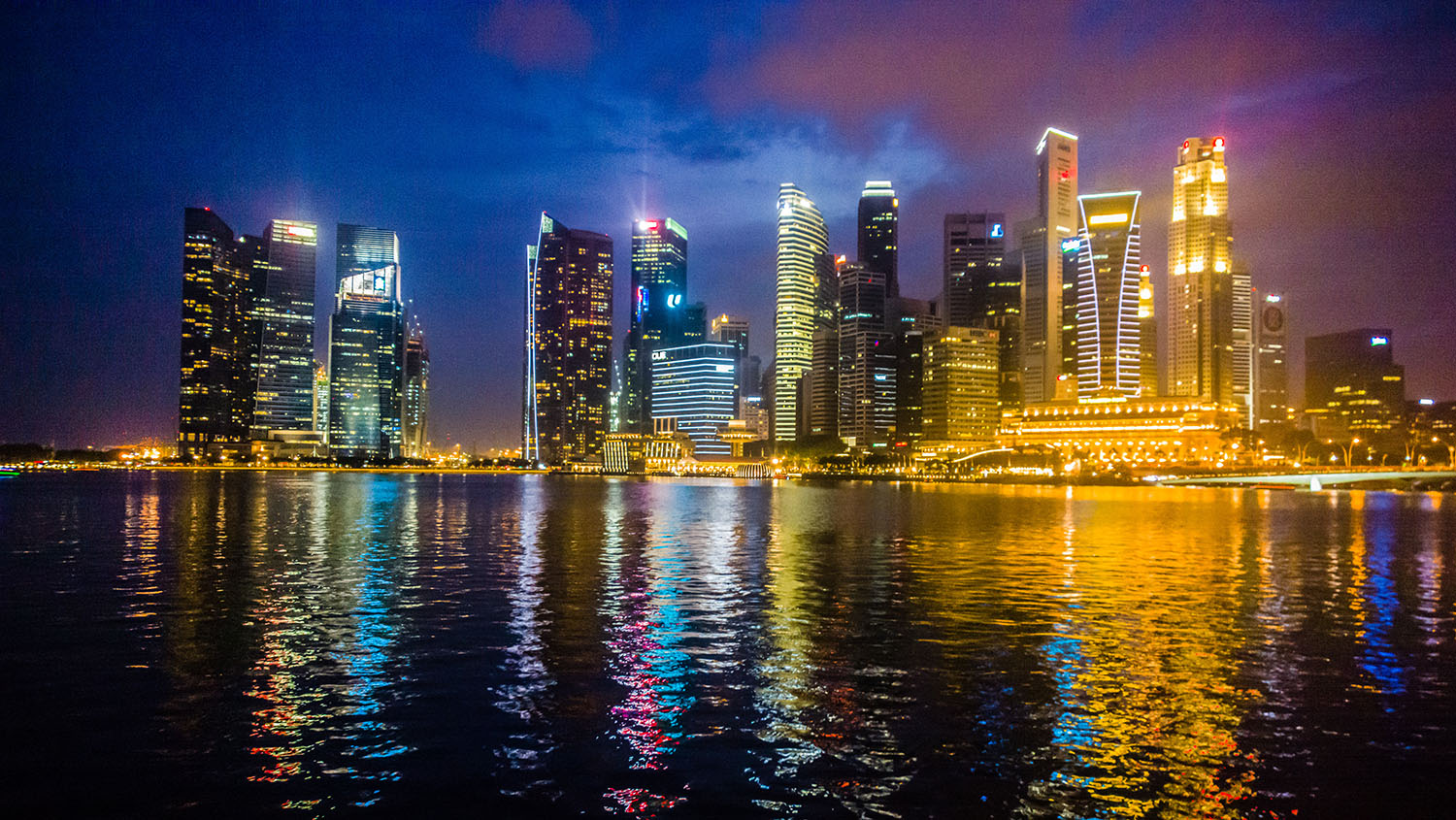 The kind of city you get when the government is efficient.

I only stayed in Singapore for 4 nights (3 full days + flight days), but that’s still long enough to go with AirBnB. Prices in Singapore are on average quite expensive, but I found something reasonable in a big family house. The host’s wording sounded like he was interested in chatting, so that was a go.

One of the guests was another Digital Nomad from Los Angeles, who used to be in IT but has now changed his career to writing. Talking to him about the tech industry was interesting in a weird way. We understood each other on most basic terminology but we seemed to have a very different understanding on how the tech industry operates, like we were describing two completely distinct industries. For example, he often mentioned outsourcing, which is not something that comes up very much in Silicon Valley, though he didn’t seem to have worked in some boring corporate IT jobs either. That said, I don’t doubt that he knew what he was talking about. It would have been nice to have more time to chat and share our respective experiences.

Unfortunately, I didn’t really get to talk to the host. Since I was only staying for a few days, I was out exploring the city for most of the day. He was a morning person so by the time I came back, he would already have gone to bed. This does highlight how it is more difficult to get the ‘full’ Airbnb experience as a tourist. The host has a personal life and is not home 24/7, while the tourist guest has a fast-paced stay in the city. My other hosts did mention that it is a shame that they sometimes don’t get to know their guests. 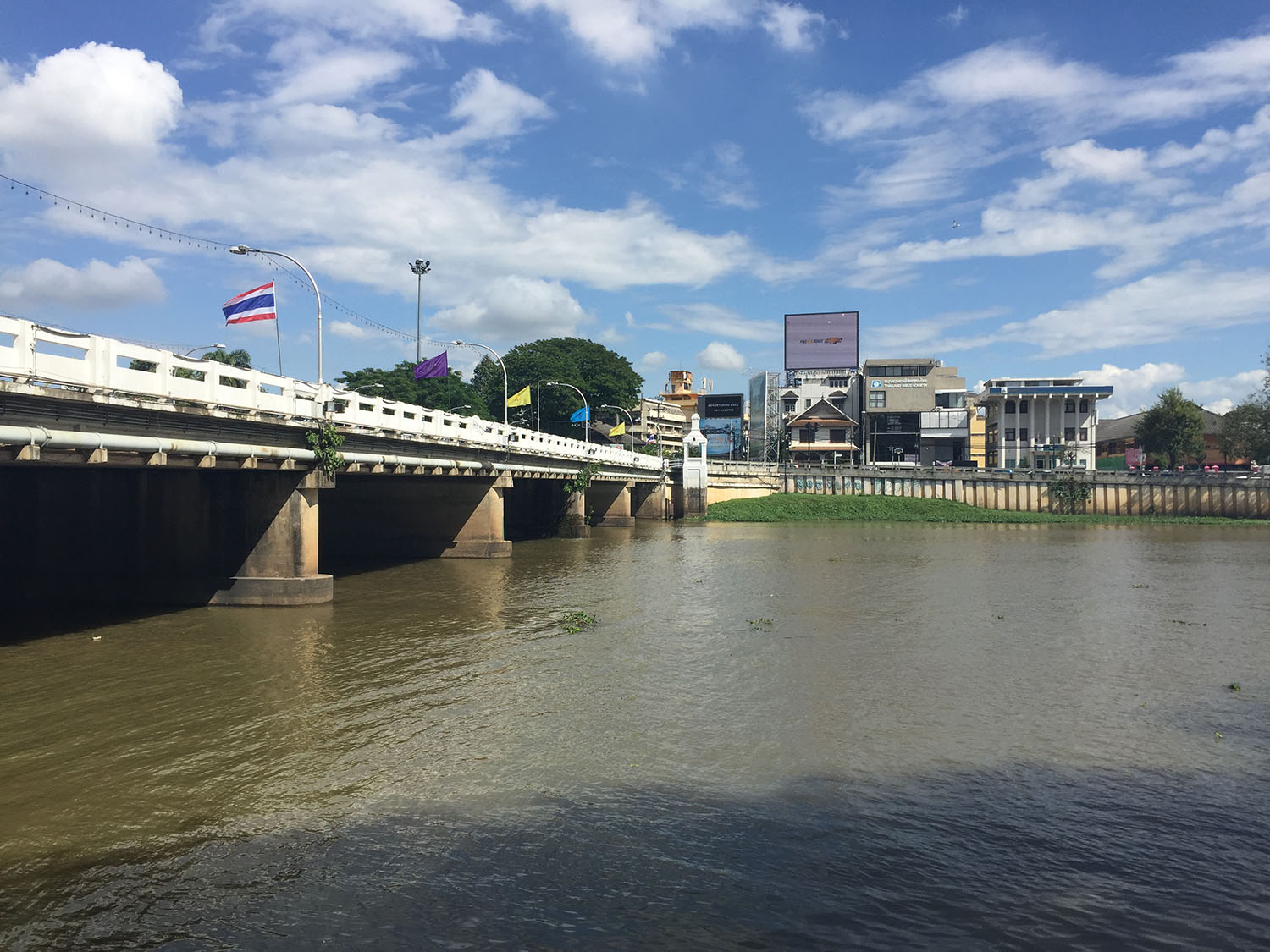 Chiang Mai is a very active Airbnb market, whereas Ho Chi Minh seems to be newer. In both cases, I actually had a hard time finding a host with a private room listing that fits very knowledgeable, interesting metropolitan type. There were a few people that potentially fit the profile, but didn’t write anything about themselves in their actual Airbnb profile. Most listings were by people renting out rooms or apartments in multiple buildings, probably as a small side business, as opposed to staying with you. Since neither cities have modern public transit with a subway, closeness to coffee shops was more important.

Also, it’s hard to beat a spacious studio at 12$/night right next to a shopping mall with many cheap food options, a co-working space and an arcade with DDR machines. 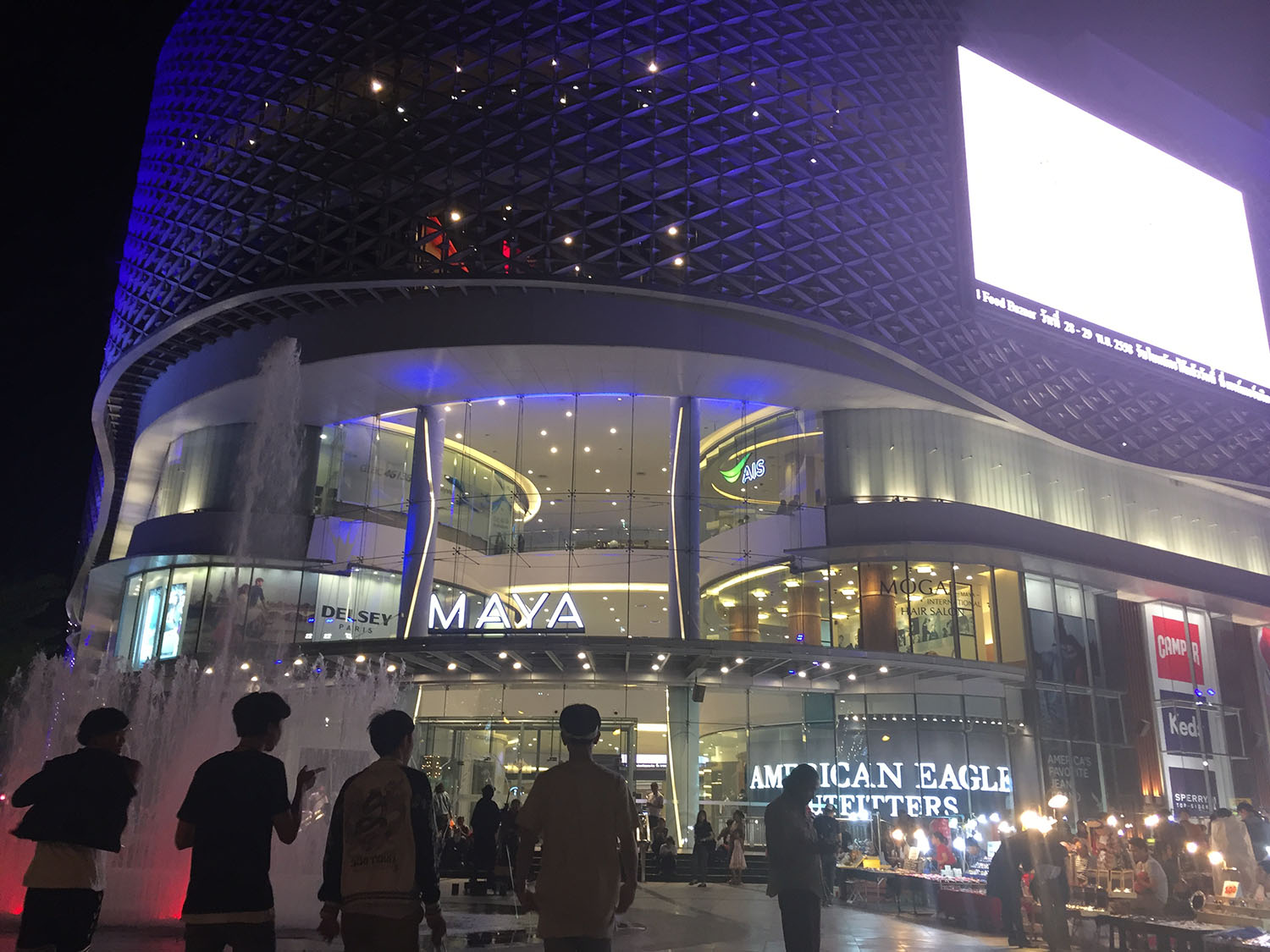 The mall where I work all I day. Comes with DDR machine.

Similarly in Ho Chi Minh, there were potential ‘candidate’ hosts but one didn’t pan out and others location was not good. Instead, I booked a room from a local landlord. That still turned out to be a great experience - while he did not actually live in the building, him and his friend were very friendly and helpful, and we went out for food & coffee a couple times. By making a business renting rooms out of Airbnb, he’s really a new-age real estate entrepreneur. It’s nice to see young people getting into the business so early - my own parents didn’t do so until their late 40s. I didn’t meet other guests however. 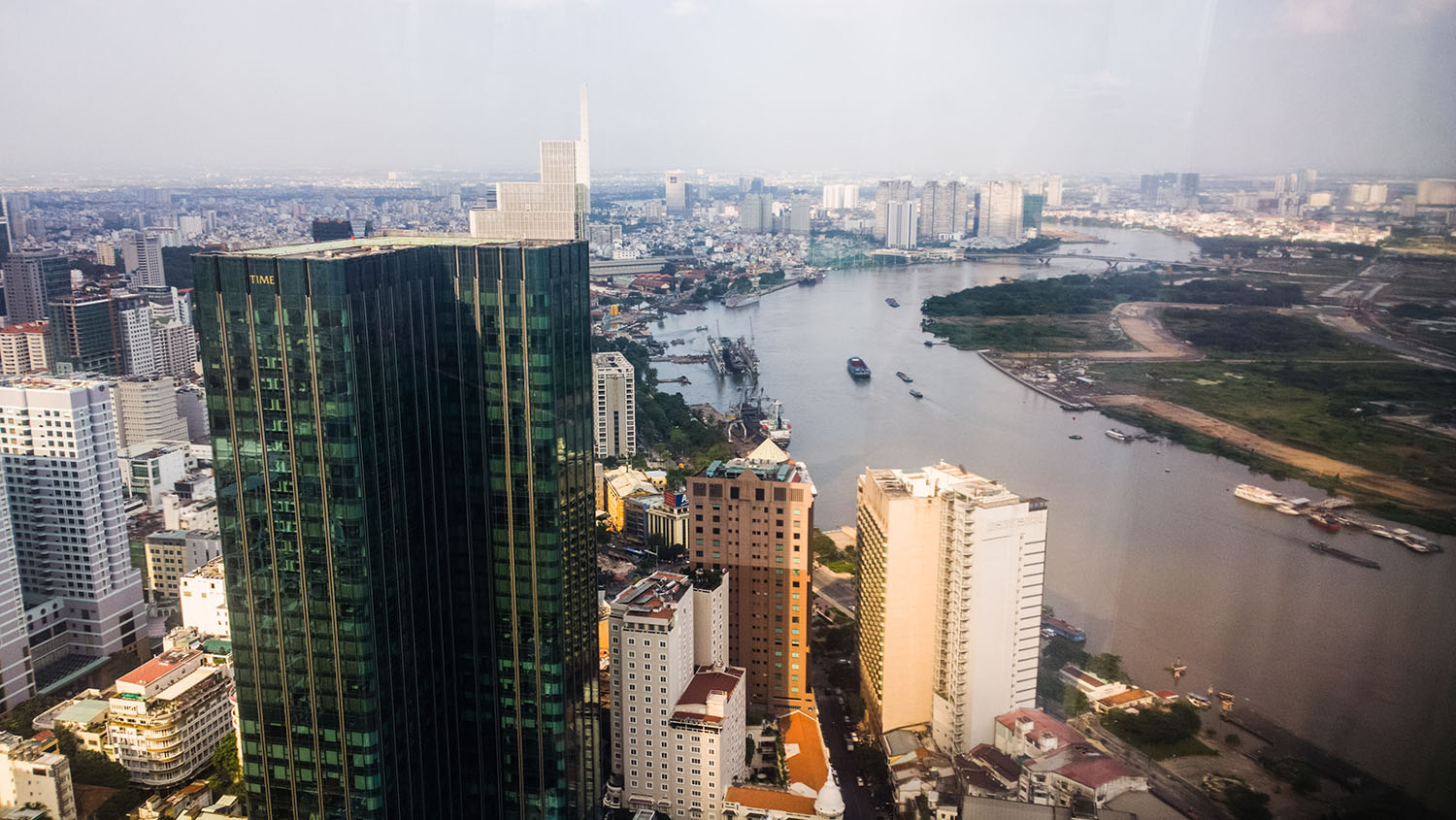 It's bigger than it looks.

My last stop was in Tokyo. I wasn’t originally planning to go to Japan, but all the good (HCM→YYZ) flights pass by Tokyo and they are offered every single day. So I figured I might as well ask for a layover. 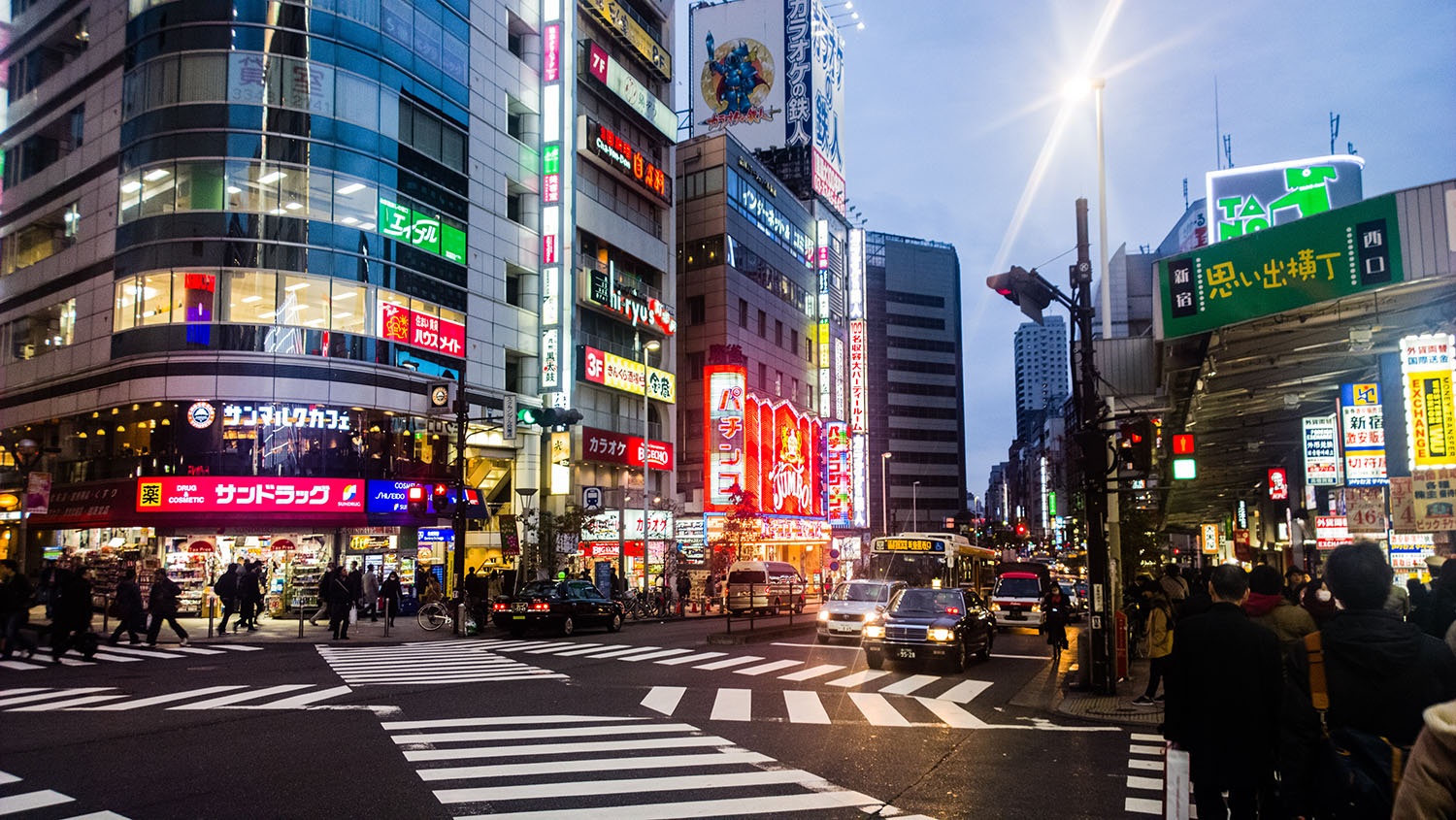 It's a BIG city. Like the whole Toyko area has the population of Canada.

I stayed for 2 nights on the border of Shinjuku. I was the only guest in this Airbnb, which is a small apartment. While it’s the shortest booking I’ve done so far, I still got the chance to go out for ramen with the host. Apparently in Japan, it’s quite common to serve the noodles and broth separately! The host was very energetic and seemed very eager to meet new people - he has a wall of polaroids with all his guests! 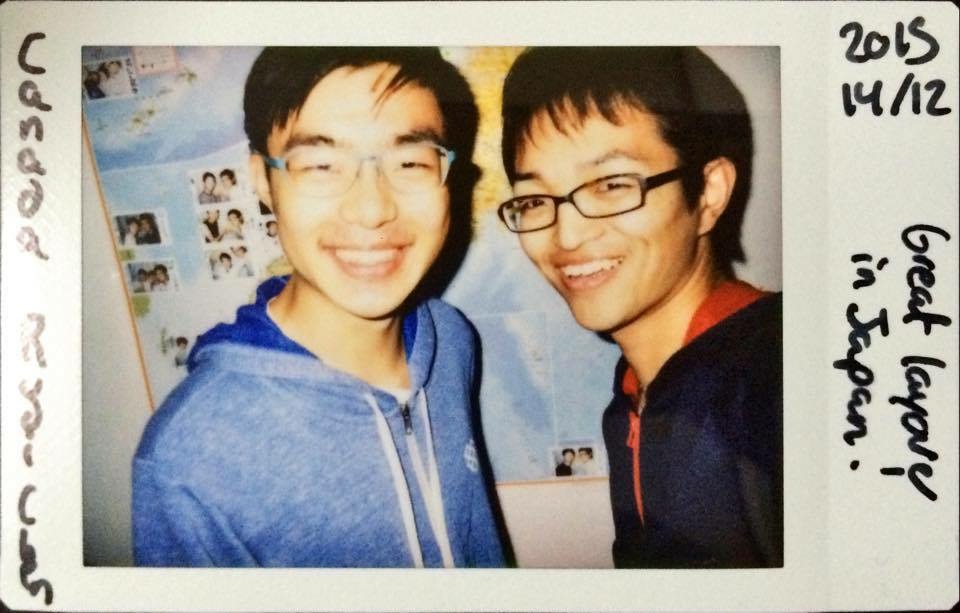 What is the lesson here?

I didn’t use Airbnb expecting to meet interesting people. I just expected, at most, to meet some locals. The tone of “homestay” makes it sounds like my hosts would be retired grandmas/grandpas (I did get that in Singapore). However, having gotten lucky and having had a good experience, I know that such experiences can be found, so I am also more likely to seek them in the future. Thus, also more likely to find them. It’s easy to imagine an alternate world in which I didn’t start out with such experiences, thus leading to not getting any at all. This is quite plausible, given that it still happened in Chiang Mai despite looking for it.

It also adds one more benefit to traveling alone. Unless you’re a couple you probably will have a hard time finding more than one private room within someone’s place.

Comments about the various housing options

Hotels: From a practical perspective, they offer convenient check-in and check-out procedures, services like room cleaning, but comes with a high price tag. They are usually designed to accommodate tourists and business travelers. For me, just thinking of staying in a hotel enhances the foreigner v.s. local feeling. Furthermore, part of the cost goes into daily housekeeping, and housekeeping is actually a negative if you want to sleep in.

Hostels: They come in very affordable prices, but the rooms (if you even have your own room) tend to be very small and bathroom/showers are generally shared for the whole floor. Fine for a few days, less so for a longer stay. You don’t feel like you come ‘home’ after a day of working in coffee shops when you go back to your hostel in the evening. It’s not relaxing. For a backpacker on a budget who is out the whole day and only comes to the hostel to sleep, this is less noticeable. But as a digital nomad, I am generally more mentally tired than physically tired at the end of the day.

Apartments: The cheapest option is always to rent an apartment. This is a great option for expats, but finding one-month leases (let alone three week leases) with all utilities and internet provided adds a lot of overhead and stress that’s not worth it in a shorter trip.

Couchsurfing: For a backpacker, using couchsurfing might make the search process easier. I heard from Mark that it is great for networking, unintuitively enough. I probably should have tried it at some point. The main problem with Couchsurfing is that it isn’t good for longer term stay. That being side, it is a very nice alternative to hostels.