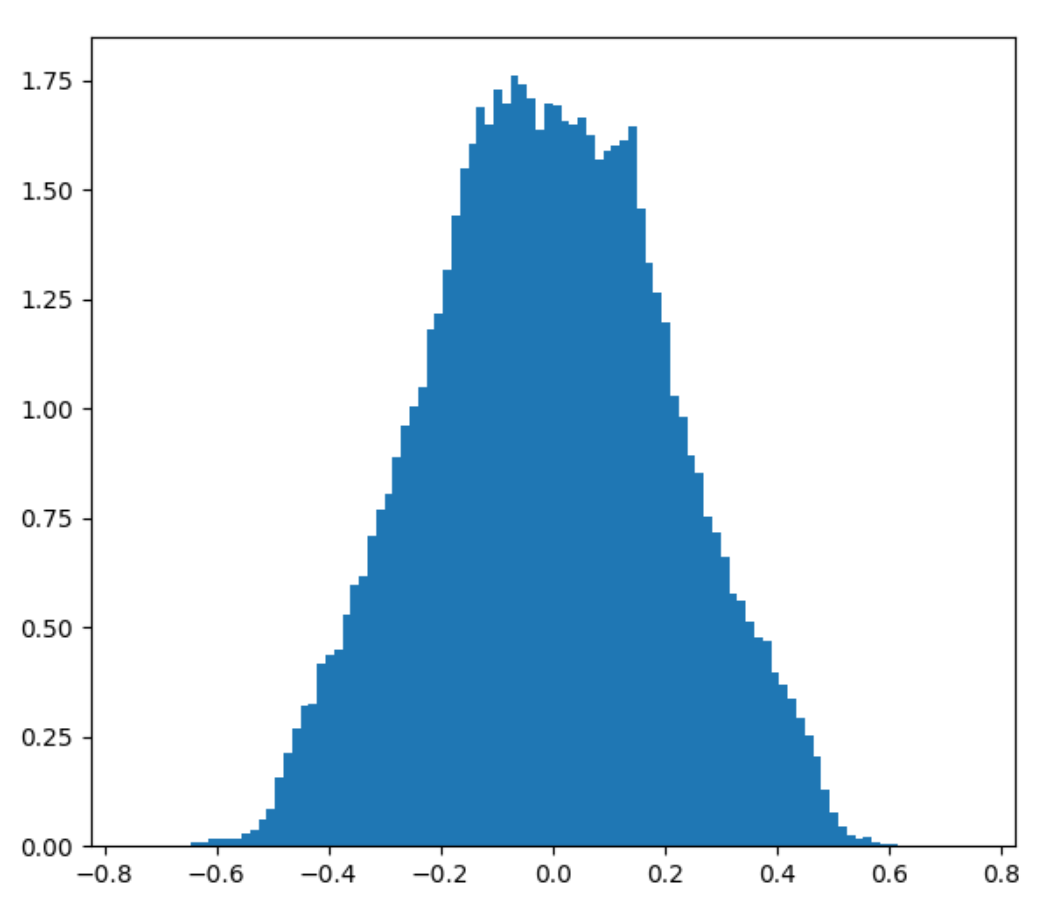 Considering that 2D Perlin has range [-0.707 to 0.707] and 3D Perlin has range [-0.866 to 0.866], we can see from these results that the distribution of Perlin noise values has a tail of possible but highly unlikely values. Even with 200k samples, we didn’t get a single point where the value was above 0.65. As discussed previously, this is because you need to sample Perlin noise in a precise spot under some very small subset of corner gradient configurations to get those extreme values.

So what if Perlin noise has a tail, do I have a bias against monkeys or something?

The problem is that those extreme values are still possible. This means that in applications where we need to guarantee that the range of values is within [-1, 1], we need to consider the min and max value. However, as they are highly unlikely, in practice we’re generating a random number in a range smaller than [-1, 1]. We lose “contrast”, so to speak.

To be fair, it’s not really that big of a deal. But we can easily fix it with minimal additional compute time, so we might as well.

The simplest solution would just be to clamp the values. But I wouldn’t be writing a blog post just to tell you to use the clamp function. There are two main issues with clamping:

1) It creates to possibility of flat surfaces (entire areas where the value was clamped). After clamping, the noise function is a mixture of flat and non-flat parts which we do not want to impose on the user. They can decide to flatten areas by clamping themselves if they wish, but that is much easier than unflattening. 2) The derivatives of the function lose continuity and this can lead to sharp edges in the noise. Those sharp edges are visually jarring it creates a discontinuity in the direction of how the light is reflected 1.

So the thing we need to do is to find a smooth clamping function \( f(x) \) where \( f’(x) \) is continuous. Then we calculate the composition \( f(perlin(\vec{v})) \) which will also have continuous first derivative.

What properties do we want this function to have?

Putting this all together, we have our smooth clamping function:

To get a sense of what (the positive part of) this looks like, I’ve embedded the graph below. If you open it in Desmos, you can also adjust the parameters yourself with a slider and see that our constraints are still satisfied.

Below is the old Perlin noise and the new Perlin noise, with the same configurations. Unsurprisingly, it looks as if we put the image in Photoshop and increased the contrast. 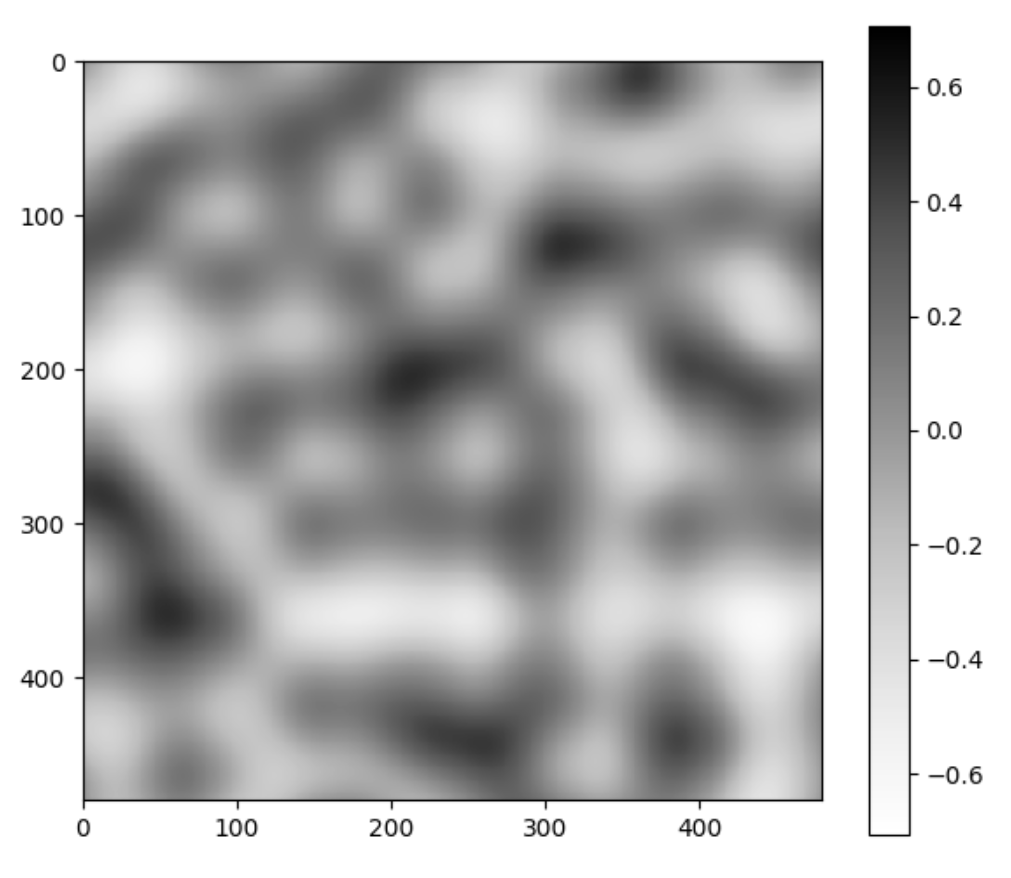 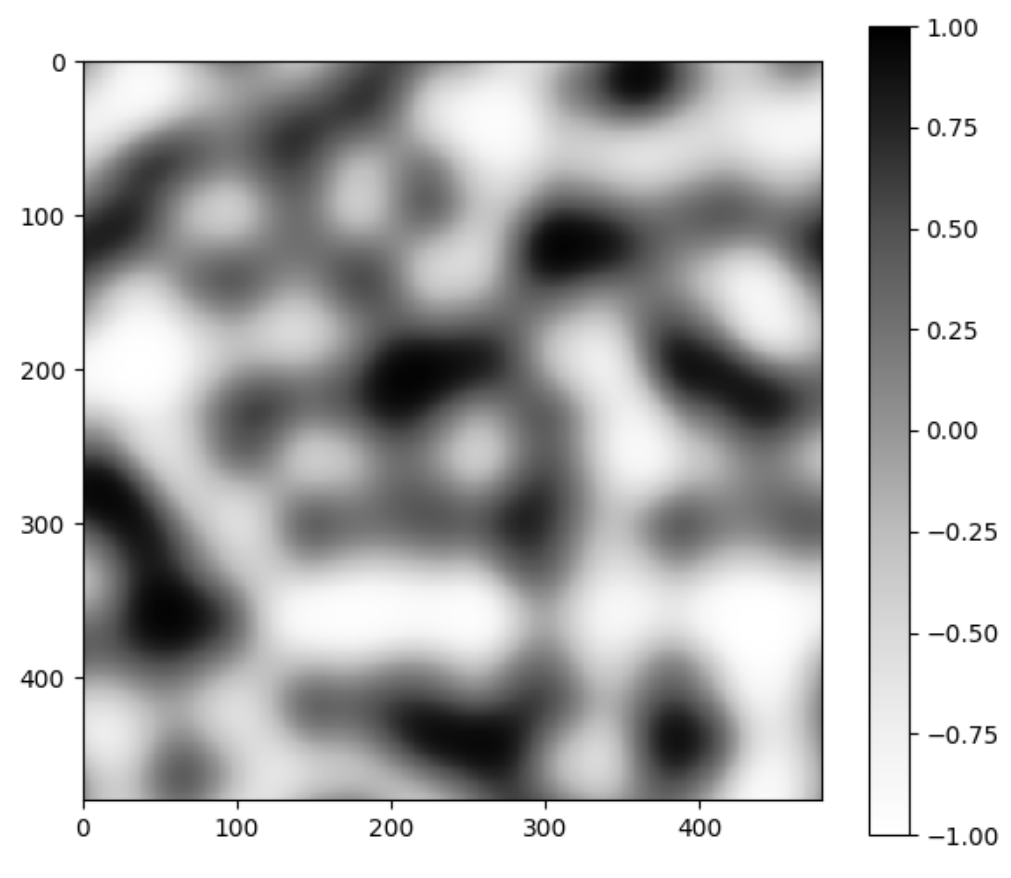 It looks like we have more uniform black and white blobs, at the expense of the grays. This is mostly due to human perception. If we plot the distribution of this new noise function, we still get that greys are the dominant color, but there are a lot more blacks and whites now. 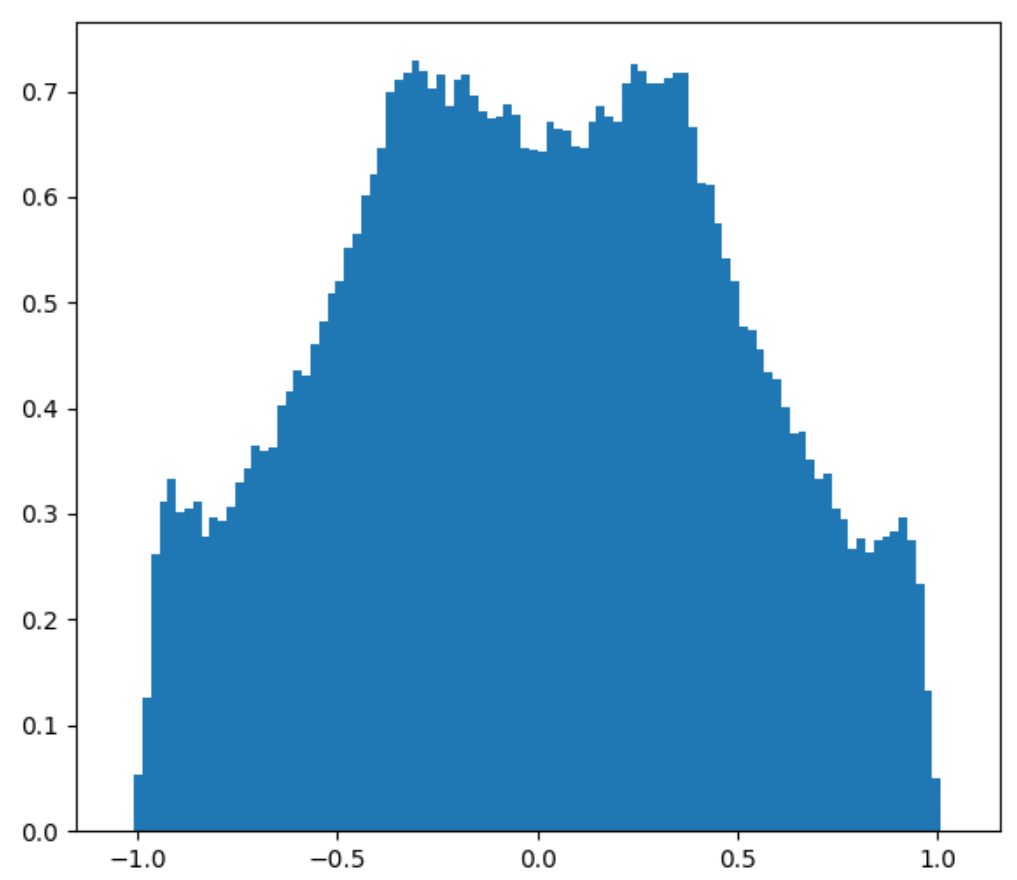 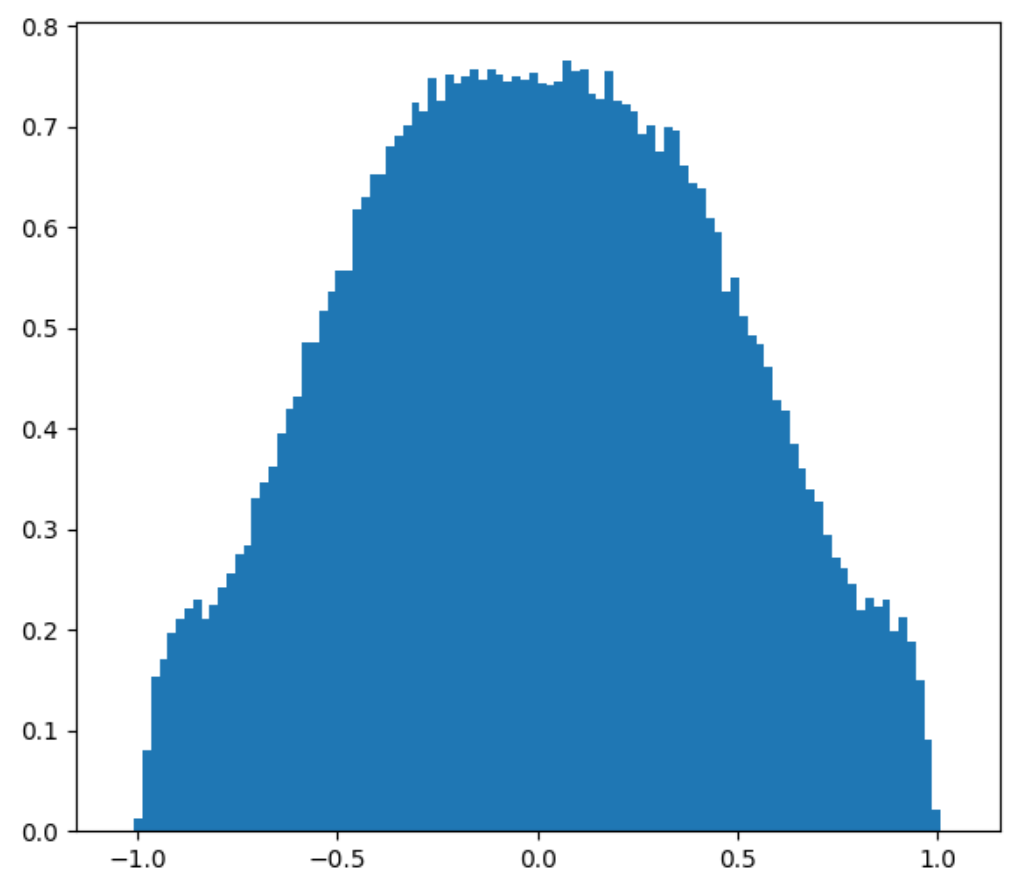 A lot of the code used to make these plots can be found on my Github.

So now we’ve got a useful modification to Perlin noise, but people rarely use plain Perlin noise in their applications. More commonly, people will sum up different frequencies of Perlin noise together to get a fractal-like texture that has detail at multiple different resolution levels. For example, this is often used to generate clouds or heightfields. 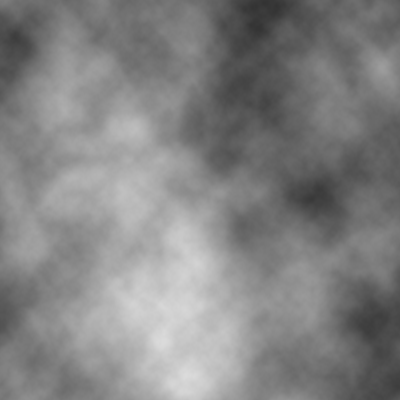 As a side effect of summing up different Perlin noises, we also create a longer tail. That is, we get even bigger min and max values that are even less likely to show up. To get an intuition for this, think about how each roll of a 6-sided dice has equal probability. Now, think about the probability of getting a particular sum when rolling two 6-sided dices . You’ve probably learned before that rolling a 7 is the most likely outcome, because 7 is right in the middle. It’s 6 times more likely than rolling a 2 or a 12. Similarly, when you sum up two Perlin noises, you need both of them to have their most extreme configuration and align them in such a way that the maximum point of both end up at the same point. Only then do you get the maximum value of the sum of two Perlin noises!

So trimming the tail is even more important when it comes to the sum of Perlin noise functions.

Finding out the size of the tail

We could do the same thing we’ve done before with plain Perlin noise to find the distribution of the sum of Perlin noises: do lots of simulations. However, this is going to become unwieldy rather quickly. There’s infinitely many ways to sum up Perlin noise at different frequencies (by assigning different weights), and we don’t want to have to do a simulation every time. It takes a lot of time to generate enough samples.

Instead, let’s come up with a simple formula that we can use. I said in the previous blog post that Perlin noise is not Gaussian-distributed. That’s true, but it does have the shape of a bell curve, at least enough that approximating it with a Gaussian would be reasonable. 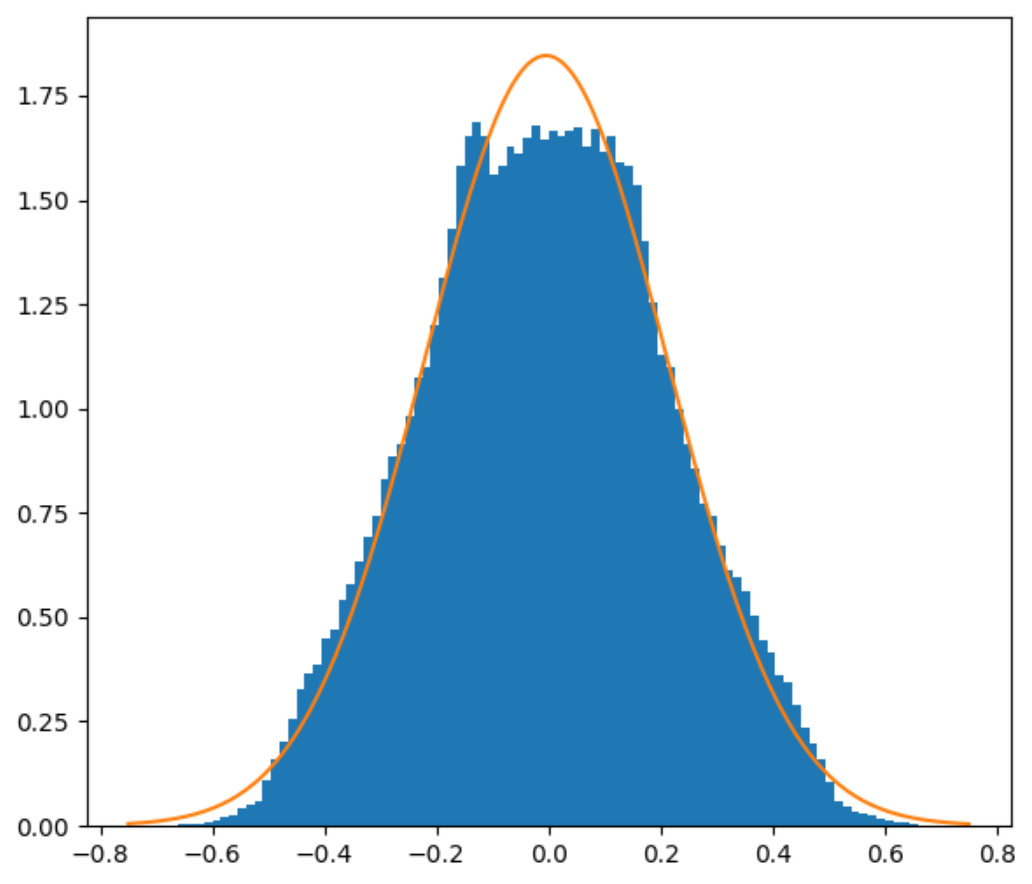 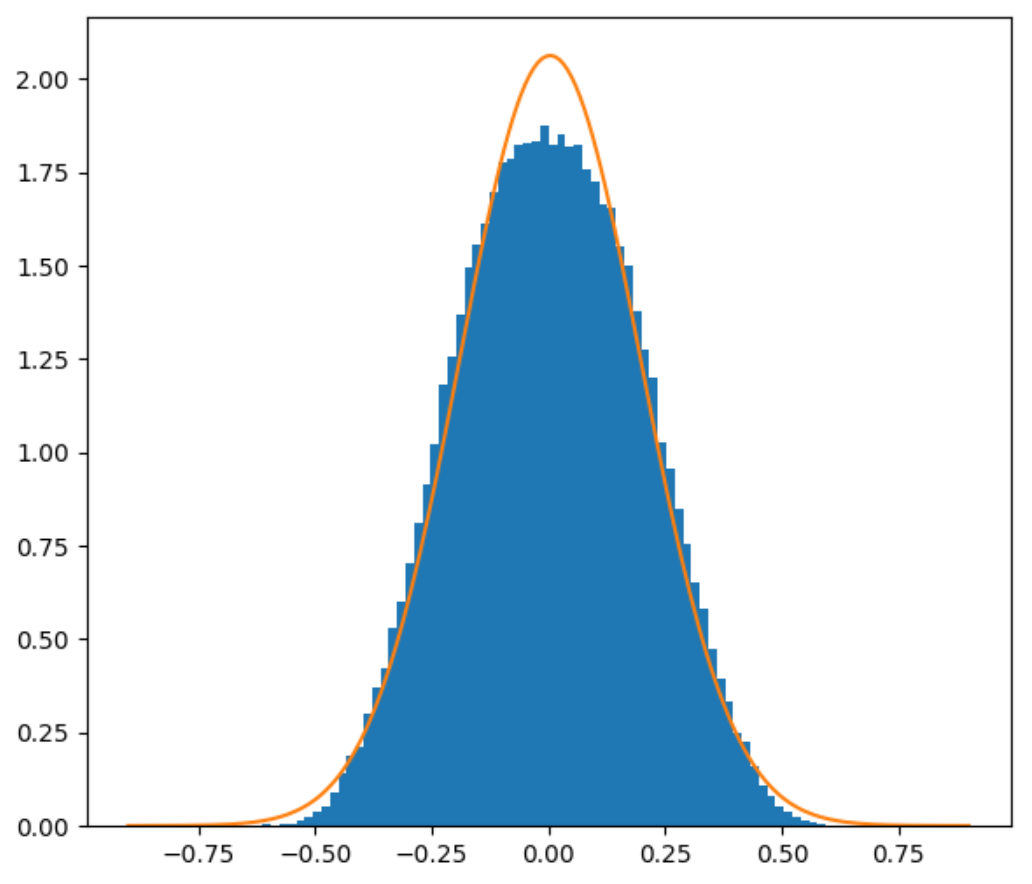 Furthermore if we set our smooth clamping threshold to \( 2\sigma \), then we get rid of approximately 5% of extreme values, which seems reasonable.

That was a lot of work…

…for what seems like a rather pedantic little detail. And in most cases, it will be. All the additional complexity to smoothly clamp large values of the Perlin noise exists to avoid some occasional visual artifacts, but the world of computer graphics is already quite tolerant of “good enough”. However, in some cases where it’s nice to have guarantees, like with distance field ray marching, this work can hopefully be useful.